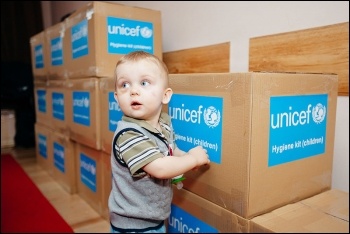 "It is a real scandal that UNICEF should be playing politics this way" was the response of millionaire and Leader of the House of Commons Jacob Rees-Mogg to the announcement that UNICEF will be responsible for feeding children in the UK for the first time in its history.

This perfectly sums up the callous attitude the ruling classes have for working-class children. While Jacob Rees-Mogg can lavish his children with all the privileges that money and prestige can buy, 30% of children living in the UK are deemed to be living in poverty. Their health and living conditions are rapidly deteriorating following ten years of Tory austerity, and now exacerbated by the Covid-19 pandemic.

It is no surprise that Rees-Mogg spouts such bile. He and his Tory peers have always openly proclaimed their disdain for working-class children. Speaking in the Houses of Parliament earlier this year, in the debate over giving children free school meals throughout half term, Tory MP Ben Bradley claimed that this would result in the "nationalisation of children". This was before tweeting that free school meals vouchers would be directed to "crack dens and brothels" if issued.

The real scandal is that huge layers of the population have to rely on charity simply to survive. Charity can only offer small relief from the relentless drive for profit. Only a democratic socialist planned economy using the vast resources that exist in society can end poverty and provide everyone with a decent standard of living.