And its relevance to today's struggles 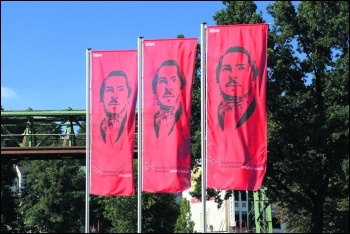 The Covid pandemic has exposed all of the existing inequalities in society, and then magnified them. This includes the gender inequality that women face. Women are one-and-a-half times more likely than men to have lost their jobs, been furloughed or sacked, and are 50% more likely to have had their hours cut.

Covid has also shone a light on another pandemic - the scourge of domestic violence and abuse. At the beginning of the first lockdown, the number of women killed by violent partners or ex-partners increased from an average of two a week, to five. Calls to helplines and searches on websites which offer help for women experiencing domestic violence have skyrocketed.

This has all been exacerbated by the desperate shortage of beds in refuges caused by years of austerity. And now, with women losing their jobs in ever greater numbers, escaping the violence is becoming more and more difficult, putting lives at risk.

Basically, women, and working-class women in particular, went into this pandemic socially and economically disadvantaged, and are likely to come out of it even more so. Engels' ideas help to explain why that is and, most importantly, what we can do about it.

The 'Origin of the Family, Private Property and the State', published in 1884, was Engels' main contribution to this issue. It showed that women's second-class status in society, the inequality, discrimination and oppression we face, hasn't always existed.

In the late 19th century this was explosive stuff. At the time, women's inferior status was considered 'natural', explained by their biology or 'God's will', and absolutely necessary for maintaining social stability. At the same time, the patriarchal family, with a male breadwinner and an economically dependent wife in the domestic sphere giving birth to and raising children, was a central, core institution of capitalism, and to challenge its universality was to challenge the entire fabric of society.

Of course, Engels' book should be viewed in the context of the time in which it was written, and in conjunction with more up-to-date material. But the general ideas he outlined regarding women's oppression are still relevant today, and still just as explosive.

He explained that gender inequality, discrimination and oppression are rooted in class society - in the emergence of societies where a small minority, an exploiting class, owns the means of producing wealth in society and exploits the class that actually produces the wealth.

Before that, in pre-class societies, people lived in communal, cooperative, egalitarian societies in which the main social unit wasn't the nuclear family as we know it today, but a kinship group - that Engels called the 'gens' - which today are usually referred to as hunter-gatherer societies, based on how they made a living.

In these societies, in which humans lived for 99% of the time that we been on the planet, there was no private ownership of the means of producing wealth, no classes and exploitation, no state apparatus and no systematic oppression of women.

Although Engels got some of the detail wrong, because of the scant anthropological and scientific evidence available at the time (see Engels and women's liberation at socialismtoday.com for more on this), the evidence that has come to light since backs up the general thrust of his ideas.

There was a gender division of labour in pre-class societies, although it was not necessarily a rigid one. In general, men were usually responsible for hunting and fishing, and women for gathering wild foodstuffs and looking after children. But this did not result in any economic or social disadvantage. The economic contribution of women and men were both vital for the maintenance of the group. Childcare was a public responsibility carried out on behalf of the group as a whole.

This was very different from the situation today. One of the main reasons why women are suffering so much more during the pandemic in terms of job losses, and pay and hours being cut, is because they are concentrated in the low-paid, part-time, often precarious jobs in retail and hospitality that have been the hardest hit by lockdowns and the economic consequences of Covid. And the principal reason why they are concentrated in those kind of jobs is that they are usually the main carers for children in the family.

During the first lockdown, women were responsible for 70% of home-schooling. In one-third of the cases where women have lost their jobs or had their hours cut, it has been because they have been unable to access the childcare they need. Covid has turned an existing shortage of affordable childcare into a disaster for working-class women especially, which can only be solved by bringing childcare provision into the public sector, democratically run by service providers and users.

Engels wrote that the situation for women drastically changed following an economic revolution in which some hunter-gatherer societies discovered how to domesticate animals and cultivate crops. This unleashed economic and social processes which, in some societies, over thousands of years, led to the development of an economically exploiting class extracting surplus production from the labour of others, and expropriating it for themselves. A special state apparatus was also created to ensure that the exploited class continued to produce, and was kept under control.

As an intrinsic part of these processes, the individual household, or family, replaced the communal kinship group as the main economic unit in society. At the same time, women of the ruling class literally became the private property of men within the family.

In order to ensure that their property and accumulated wealth could be passed on to legitimate heirs, the sexuality and reproduction of women of the ruling class came under the authority and control of husbands and fathers, including through the use of violence and physical chastisement. And, as the state apparatus developed, the legal system, religion, education, and ideology generally served to legitimise and reinforce women's inferior, second-class status, and deny them basic rights.

This is the historic basis for all of the inequality, discrimination and oppression that women still face today. It is at the root of domestic violence and abuse, rape, sexual harassment, the double standards and stereotyping of male and female roles and behaviour, and sexism in general.

Therefore, gender oppression, Engels explained, can only be eliminated by ending class society - a fundamental transformation in the way that society is structured, organised and run. Today, this would mean moving away from an economy based on the private ownership of the means of producing wealth by a small group of super-rich capitalists interested only in making a profit, to one where the principal industries are publicly owned, and democratically run and planned by working-class people.

It would then be possible to immediately release the resources for changing the economic and material situation for women. Everyone would be guaranteed a job on a decent wage, which would mean that women would have real economic independence.

It would be possible to do what Engels put forward in the 'Origin of the Family' - to socialise the unpaid labour of women in the family by the state providing flexible, quality childcare, social care, affordable community restaurants, affordable housing - things that would totally transform the lives of women, and working-class women in particular.

We would add, that ending gender inequality in the family and in the workplace would also lay the basis for eliminating gender violence and the sexual and cultural oppression women face.

The values in society would change. Capitalism is a system based on unequal wealth, hierarchies of power, and competition. The capitalist class is prepared to resort to the use of force and violence to defend its interests and control where necessary - against strikers, protesters, and in wars. Those values have an impact more broadly in society and affect how we relate to each other.

A socialist system would be based on cooperation and solidarity, and those values would be reflected in personal relations and culture, just as they were in pre-class societies.

And of course, there would no longer be a privately owned media, or beauty, fashion, and leisure industries, and all the other industries that turn women's bodies into a commodity to make a profit, and promote stereotypical expectations and norms about how women and men should look and behave.

If we removed all of those things, while at the same time initiating a programme of awareness raising and education, then all gender oppression could be ended over time.

Engels outlined the origins of women's oppression and what would be necessary to end it - a socialist revolution led by a united working-class. His general ideas continue to form a vital part of the programme and strategy of the Socialist Party in our struggle to end capitalism and all forms of exploitation, inequality and oppression.