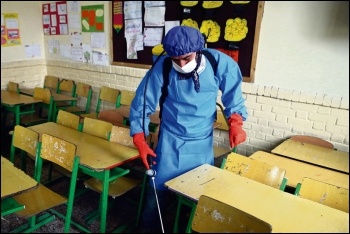 Any lingering illusion that the government's strategy for handling the Covid pandemic was aimed at protecting the entire population, without fear or favour, has been well and truly shattered.

Workers are forced to attend unsafe workplaces, there's pitiful financial provision for those self-isolating, and a complete failure to bring to book employers flagrantly breaching the law. The government has been busy blaming ordinary people for spreading the virus to cover up its failure to take timely decisive action and its protection of employers.

A survey revealed that one in ten insecure workers had gone to work within ten days of a positive Covid test, compared to one in 25 for workers generally. This fact alone justifies banning gig economy practices. One in nine workers have been forced to go to their workplace when they could have worked from home.

The Health and Safety Executive (HSE) received 2,945 complaints of Covid-unsafe workplaces between 6 and 14 January, but has yet to issue a single enforcement notice during this lockdown. Of the 97,000 reports of workplace breaches of Covid precautions the HSE has dealt with, only 0.1% have resulted in any enforcement action.

Unsurprisingly, many low-income workers are avoiding the whole testing regime, because they can't afford to self-isolate, and may not be offered work in the future.

Frances O'Grady, general secretary of the Trades Union Congress (TUC) has rightly called for the law to be enforced against employers, but we need to go further. The Tories have proved that they have no intention of protecting workers or standing in the way of the bosses' profits.

We need a £12-an-hour minimum wage, and workers on furlough should get 100% of their pay. We need an end to the gig economy and its replacement by secure jobs with guaranteed hours.

The HSE has shown that it is in the pockets of the bosses and should be replaced by an enforcement body under the control of the trade union movement. That body could inspect the financial books of these companies. Any that can't afford these basic demands should be nationalised, under the democratic control of workers.

The Tories' policies - turning a blind eye to employers that place the lives of workers and their families in danger - will never properly cure this virus. The Tories have no right to rule and the labour movement should be campaigning for their resignation, and a new mass workers' party.