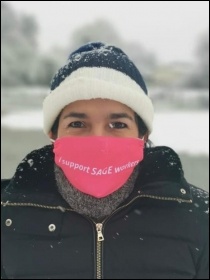 Care workers from Sage Nursing Home in Golders Green, north London, are on strike again from 4 to 8 February. They are striking for parity with their counterparts in the NHS – a pay rise to £12 an hour and the same level of sick pay and annual leave.

“They make you think that you are not a person. It’s how they look at you, how they treat you.”

These were the words of Julia, one of the Sage nursing home care workers. Her remarks will no doubt resonate with many care workers.

They have decided that they will no longer tolerate poverty pay, poor conditions and bad treatment. They are fed up with asking for justice, they are now striking for justice!

Bile, another striking care worker, described how difficult it was to take the decision to strike. But they were encouraged by the huge support that they have received from the local community and trade unionists.

UVW held leafleting sessions in the local area in the build up to the strike, and ran a high-profile social media campaign to add pressure on the employer and build broad support.

The strike comes after months of negotiations between the workers and Sage trustees. Two are billionaire landlords, Benzion and Solomon Freshwater, owners of property empire Daejan Holdings.

Although the employer has said that it is unable to meet the strikers’ demands, Sage can easily afford to pay up.

In February 2020, Sage boasted that their income had risen to £3.3 million, with another £3.2 million reserves. A UVW organiser added: “It is pretty rich for these billionaires to say there is no money to pay a living wage, while in the same breath they’re hiring a union busting legal consultant with a going rate of £354 per hour.”

UVW anticipate that this strike will be a historic turning point for carers. The courage of these workers could certainly act as a beacon.

But for this strike to light the torch of more widespread industrial action, it is vital that not just UVW, but other major unions – Unite, GMB and Unison – develop a plan to popularise these demands and link workers up throughout the sector. This could inspire some of the lowest-paid workers to join a union, and fight for a radical set of demands.

They also need a political voice. Here there is room for the Trade Unionist and Socialist Coalition (TUSC). TUSC could enthusiastically take up the call to build support for widespread strike action, if employers fail to meet workers’ demands.