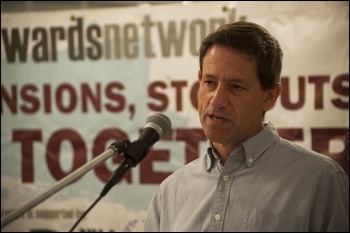 I am standing to be National Education Union (NEU) deputy general secretary because our union needs clear and determined leadership if we are going to withstand the serious challenges ahead of us. More than any other candidate, I have the experience, skills and campaigning record that can make us a stronger team.

Years of funding cuts, pressure from school inspectorates Ofsted and Estyn, and 'exam factory' conditions have already taken their toll. Now teachers and support staff face further attacks from a government hoping to make us pay for their failures.

Making a stand on safety has shown that we can succeed when we act decisively. I'll work to win more gains in future.

As deputy general secretary, I will work to build a union that has the confidence, strength and organisation to defend the pay, jobs, safety and working conditions of education staff and, in doing so, defend education as well.

Every candidate will propose changes that could improve our conditions, and pupils' learning conditions. But the key question is, how can they be won?

The NEU has not been slow to make demands. Our problem has been that they have too often been ignored by employers and ministers. Our 'five tests' for Covid safety were not met - putting our health and safety at risk. For years, we've complained about unreasonable workload, but it keeps getting worse and now we face a 'pay freeze' - are our demands for improved salaries going to be ignored too?

Throughout the pandemic I have consistently argued that to defend school safety we would need to use our collective strength. The New Year 'U-turn' showed what we could achieve. Now we need to make more gains.

I am standing to be a deputy general secretary who works to bring our union together - in our workplace groups, districts and branches, alongside the staff and other resources paid for by your subs - with a belief that we can, and must, succeed in winning our demands.

As a member of the National Union of Teachers (NUT) national executive from 2010-15 and then NEU London regional secretary from 2016-19, I have experience of working within the union at its highest levels.

I have been active within the NUT, and now the NEU, throughout my working life. I became a science teacher, and soon a local union officer, in London in the 1980s.

As Lewisham NUT Secretary for over 20 years, I doubled local membership and supported hundreds of colleagues. I have organised many successful campaigns, opposing cuts and academisation, defending pay and workload.

I am still a teacher and local NEU officer today, now in north west England, experiencing the pressures on members at first hand. I am regularly invited to put our case across to the press and media.

In short, my record shows that I can be a deputy general secretary that can be relied on to provide clear leadership.

What I stand for: