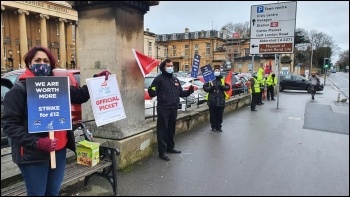 The 23 security guards in the Unite union at Reading hospital are striking over the failure of their employer to make a decent pay offer for 2020.

The Birmingham NHS Heartlands porters in Unison are currently taking strike action about the proposed imposition of a new rota. The proposed rota impacts on workers' health and wellbeing, their caring responsibilities, work/life balance, and results in a significant cut in wages for many.

Outrageously, their reward is attacks from management. We call for all outsourced workers to be brought back in-house and for a 15% pay rise for all NHS workers, as well as defeating the Tory public sector pay freeze.