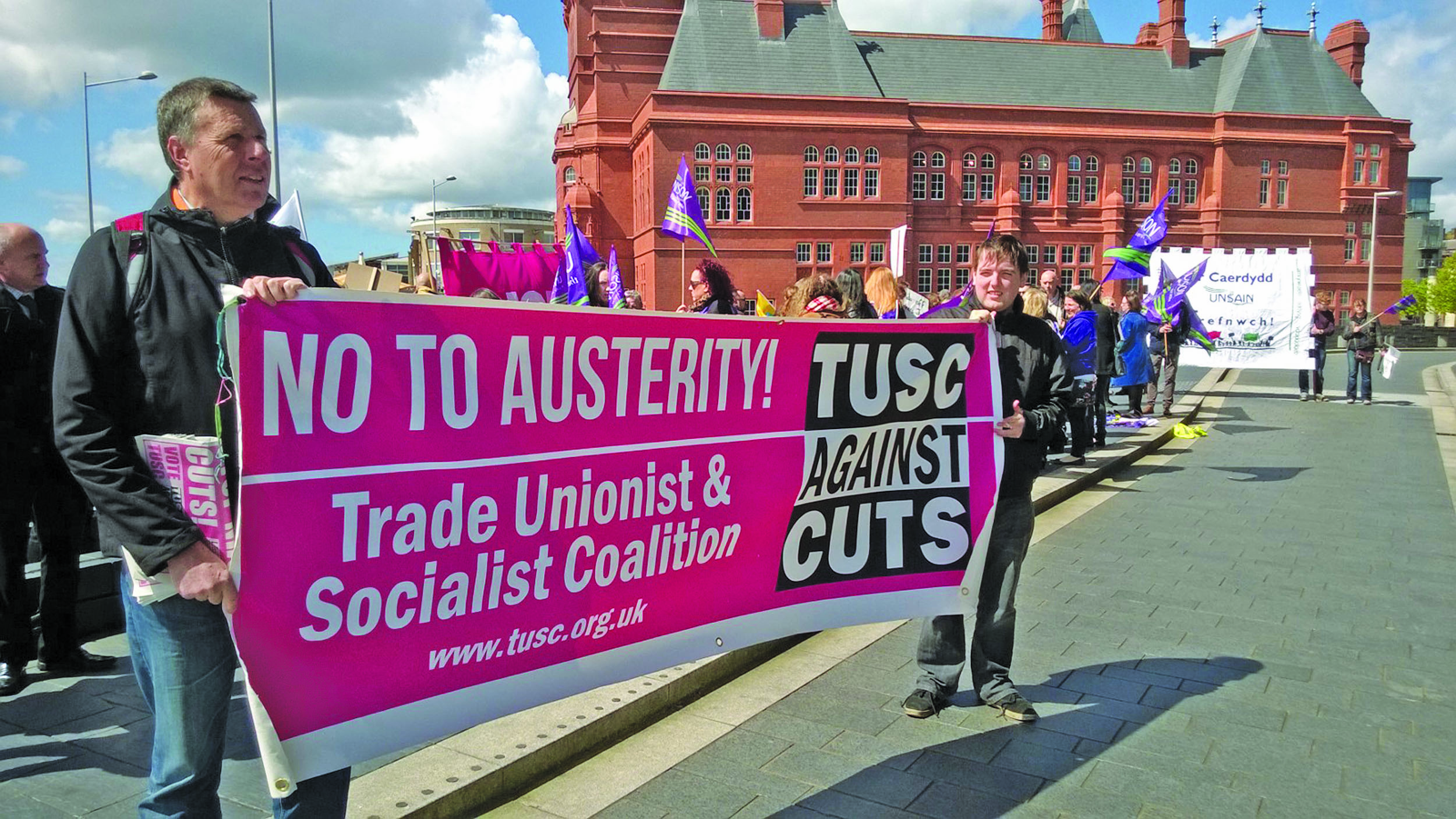 Home Services The Trade Unionist and Socialist Coalition (TUSC) is ‘up and running’ for...
Facebook
Twitter
WhatsApp
Email
Print

Recently, a series of meetings have relaunched the Trade Unionist and Socialist Coalition (TUSC) anti-austerity electoral challenge to the pro-cuts establishment parties, including Starmer’s Blairite Labour Party. The following reports all indicate enthusiasm to mount a left-wing electoral challenge in the forthcoming council and mayoral elections in England.

TUSC was initiated by the RMT transport union, and along with other trade unionists and socialists, the Socialist Party is a core component of the coalition.

Over 90 trade unionists, socialists and community campaigners attended an open online TUSC meeting on 20 January to discuss the Greater London Authority (GLA) elections in London this May. This included Socialist Party members, RMT transport union members and a number of ex-Labour Party members, as well as a former and a current Labour councillor.

TUSC’s anti-cuts and pro-worker policies could be just the remedy for people ravaged by a decade of Tory austerity leading to growing inequality, which has widened during the Covid crisis.

It was great to see a lot of young people attend the meeting. The Tories offer young people no future. Last year, youth unemployment rose 14% in just three months, and when Transport for London’s (TfL) financial crisis hit, the Tories wanted to remove free travel for under-18s.

A TUSC mayoral candidate would not only offer an anti-austerity alternative to working-class people in London, but also show Khan his attacks will be challenged.

RMT national executive member for London Transport Jared Wood, addressed the importance of fighting to defend workers’ pay and conditions. Many transport workers had been badly affected by the employers’ mishandling of PPE, resulting in unneccessary deaths in the industry.

Already, many union members are opposed to Khan’s austerity plans, – indicated by a resolution passed by the London Underground Engineering branch which demanded that, unless Khan backs down from TfL cuts, other candidates should be approached to stand for mayor.

Nancy Taaffe, chair of anti-cuts community campaign Save Our Square (See page 4), raised the issue of affordable housing, stating that the mass building of council housing – a key TUSC policy – is necessary as working-class people are no longer able to afford to live in the boroughs in which they were raised. This was echoed by numerous contributors.

Labour’s attempt to secure votes by occupying ground right-of-centre lacked appeal and younger voters in particular were alienated by it.

The Socialist Party will continue to work with trade unionists who agree that we must fight cuts. This meeting showed an appetite for anti-establishment politics, reflecting a public mood angry about the effects of capitalism and hungry for an end to austerity.

A series of online TUSC meetings across Yorkshire kicked off in West Yorkshire on 20 January.

He pointed out that under the leadership of Keir Starmer, Labour councils have continued implementing Tory cuts. And with cutting Labour and Tory councils, or right-wing populist parties standing in May’s elections, there will be no real working-class option at the ballot box except TUSC.

TUSC’s idea – of standing a range of socialist candidates under a no-cuts programme – was met enthusiastically by the meeting, which included members of six different trade unions.

Ex-Labour MP Chris Williamson, a representative of Resistance on the TUSC national steering committee, commented that Starmer’s commitment to neoliberalism, and the ‘low hanging fruit’ vote of the centre-right electorates, meant that footballer Marcus Rashford has done more to oppose the government than the ‘opposition’ party ever will.

Chris said that despite a mood among people of being ‘pissed off with politics’, he has great confidence in socialist grassroots movements and solidarity on the left to improve the prospects of working people.

He ended his contribution by saying TUSC needed to learn from Corbyn’s mistakes, and state that we are clearly and boldly fighting for working people.

A National Education Union (NEU) member referred to the massive online meeting earlier this month of 400,000 members – the largest TU meeting in history – over the unsafe return of schools. The NEU has since seen an increase in union membership and political discussions in the workplace.

There was also agreement that, with a clear leadership, based in the unions and working-class communities, TUSC could have great potential.

TUSC West Yorkshire steering committee is in the process of finalising a report outlining the cuts being made by all five West Yorkshire local authorities, will be holding further discussions on fighting these cuts, and emboldening trade unionists and activists to run under the TUSC banner.

On 23 January, an online launch meeting was held for the Nottingham and South Nottinghamshire county area of TUSC.

Dave gave a thought-provoking speech, setting out why there needs to be an independent, working-class challenge to the ‘different shades of establishment’ represented by the major political parties. He outlined TUSC’s plans to stand candidates in the May council elections, and discussed some of the key policies TUSC is fighting for, most notably opposing all council cuts.

This is particularly relevant, given that Nottingham City Council has proposed another round of brutal cuts for March (partially as a result of the failure of Robin Hood Energy), including removing a further 272 jobs, closing one children’s centre, the Missing Children’s Team, and making ‘savings’ of £3.2 million from the adult social care budget. This is after 13 years of successive cuts; in fact, three years ago a councillor said they were ‘cutting into the bone’, as Jean Thorpe described later in the discussion.

Dave also talked about the ‘political vacuum’ since Keir Starmer was appointed Labour leader, highlighting not only Labour’s various failings during the Covid crisis, but the complicity of certain trade union leaders. He warned that this vacuum was not guaranteed to be filled by the left.

The meeting was optimistic, citing not only the hard work to be done, but also the opportunities for real change.

The meeting concluded with the aim of forming a steering committee for 3 February.

We needed to bring as many trade unionists and fighting socialists into the steering committee as possible. First, we did our best to find contact details for local trade union branches and sent emails to trade unions advertising the meeting.

There were only a few responders, so we needed to be bolder. Two members of our Socialist Party branch who are Unite union members, raised the subject with their local Unite branch in one of its regular Zoom meetings.

They were unapologetically upfront in raising the subject of TUSC and the need for a political voice for working-class people in Tory-run Northampton. This piqued the interest of several Unite branch members. The Unite branch secretary agreed to attend the first committee meeting.

Having followed events (over Covid safety and a pay claim) at sandwich maker Greencore, in Northampton, we knew there would be a number of Bfawu members, the bakers’ union, looking for a new political home.

Sure enough, when we spoke with regional organiser George Atwall he was already aware of some shop stewards who would be interested in being a part of TUSC. Two baker’s union shop stewards joined the meeting.

The discussion was energetic and incredibly productive. A steering committee was agreed and roles allocated.

Boldness and enthusiasm paid off. Now we are busy building for our public meeting on 4 February where all prospective candidates and supporters will be encouraged to take part in an exciting new challenge to a rotten Tory council.