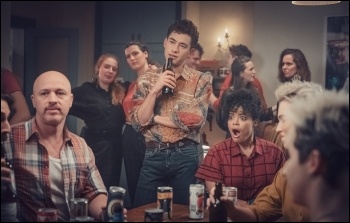 I remember the first time I heard about being gay outside of jokes in the playground. It was looking at pictures of Kaposi's sarcoma patients in a science textbook page on HIV/Aids. For many people in my generation this will ring true.

For many LGBT+ people around the world, HIV/Aids became almost synonymous with homosexuality; it was a 'gay plague'. The virus' discovery was seized upon by right-wing conservatives to push 'traditional family values'. People's feelings of shame forced them back into the closet, and divisive ideas of 'deserving' and 'undeserving' people with HIV were used to justify government policy.

This period, and these issues, have now been dramatised in Russell T Davies' 'It's a Sin', a five-part television series exploring the Aids crisis in Britain between 1981 and 1991 from the point of view of five friends. From initial rumours and whispered conversations about HIV, the series takes the viewer up to the heights of the epidemic.

The series explores the prejudice LGBT people faced at the time, and shows how this worsened over the course of the epidemic. Characters deal with being disowned by their families, fearing the loss of their jobs, mortgages and lifestyles, alongside funerals being refused, partners banned from funeral services and patients being detained and isolated against their will.

Sadly, these were not dramatic inventions for the series, but are instead based on real events that only served to heighten the crisis. People often hid their diagnosis or symptoms for fear of encountering prejudice, and turned to desperate 'cures' such as drinking battery acid.

This desperation was certainly heightened by the actions of pharmaceutical companies; the show highlights their lack of interest in anything other than profit. Price gouging took precedence over patients, and this sadly still continues today. PrEP, a preventative medication, costs $2,000 a month in the US, far beyond the means of most people at risk. And we can see from the current twists and turns around Covid-19 vaccines that HIV/Aids medication is not the only virus where drug companies put money before people's lives.

However, It's a Sin doesn't only focus on the horrors of the epidemic. It also shows the work of members of the LGBT+ community and wider society in fighting prejudice, corporate greed, and government inaction.

Protests such as 'die-ins' forced action that otherwise might not have happened, leading to major changes and positive developments in patient treatment, and not just for those with HIV/Aids. It showed the power working-class people can have in changing society, even during a health crisis - an important lesson for today.

The Socialist Party's forerunner Militant boldly campaigned during the Aids crisis for mass education, free from moralising, to promote safe sex, including free condoms for all. We campaigned for proper funding for the NHS to research, prevent and treat HIV/Aids; nationalisation of the drug companies under democratic workers' control and management; and to tackle the underfunding of vital services that could support LGBT+ people, those with HIV/Aids, and the wider working class.

While we are thankfully far from the horror of some of the scenes in It's a Sin, sadly many of these demands are still needed today for the fight against HIV/Aids. The Socialist Party continues to fight for a health service that puts patients before profit, alongside tackling discrimination and prejudice in society.

But to truly tackle the prejudice and discrimination this series so effectively shows to be at the heart of the Aids crisis, we must end the profit-driven capitalist system that fosters LGBTphobia and oppression to divide working people and maintain its rule.

It's a Sin. Watch it. Brutally realistic about the 80s and what it was like. What the other pandemic was like then. The Militant pamphlet at the time 'Out and Proud' was great. Ground-breaking at the time on the left.

It's a Sin. The words so many of us LGBTQIA people would've heard growing up, and some to this very day! Episode one done, and loved it! I'm sure there'll be tears as the episodes progress. Series like this remind me how far we've moved forward in society. A chronicle of four friends during a decade in which everything changed, including the rise of AIDS.

It's a Sin. Yes, the existence of a profit-hungry pharmaceutical 'industry' is a sin against humanity. There are many more points to make. But we have to point to the need for nationalisation under democratic working-class control and management as part of a wider programme of nationalisation towards a democratic socialist planned economy.

Just watched it in entirety, a reminder of being 16 in 1987 and the apocalyptic government announcements and doom. Excellent acting and heart-wrenching.

It was absolutely brilliant, I was a student nurse at that time and my best friend was a gay guy. The story was very close to my truth at the time. So hard to watch knowing the results, but a fantastic story to tell. Honest, sometimes too honest, but also a great watch.

Watching the whole series of It's a Sin - moving. What a generation had to go through.