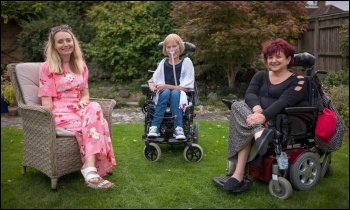 The Hidden Story of Disabled Britain   (Click to enlarge)

Cerrie Burnell and her team have produced a landmark documentary on the subject of disability.

She herself faced horrific discrimination when she first became a CBeebies presenter and was confronted with the reality of prejudice against disabled people.

The documentary traces the development of prejudice from the eugenics movement so beloved of Dominic Cummings and Adolf Hitler. The clear concept of segregation was to prevent 'inferior humans' from breeding.

The movement against this led to access to mainstream education for a number of disabled students. One campaigner recalled pupils who had no disabilities chanting "we want to be with our friends". Unanswerable.

Access to public transport for people in wheelchairs is now the norm, but that access is patchy at best, and the poor provision is a denial of civil rights - actually no different from the Alabama bus company refusing a seat to Rosa Parks.

It is ludicrous and insulting that people with disabilities are expected to rely on charities - Chris Tarrant was shown making a self-righteous defence of his patronising attitude.

Disabled people have suffered disproportionately from cuts in public spending and from the impact of the pandemic. Attitudes need to change and this first-class documentary will help.

The prejudice against people with disabilities is a major alibi for the Tories to justify refusing them basic civil rights, and refusing to spend public money on improving facilities and improving access. It is also a means to 'divide and rule'.