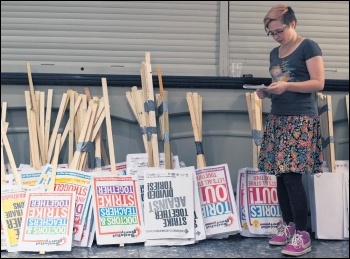 Despite the restrictions placed on our campaigning activity, Socialist Party members and supporters have responded to the challenge by doing what they can to raise much needed fighting fund. The election appeal will be a significant part of what we raise this quarter, but our members are planning lots of different ways to help us smash the fighting fund target.

Stoke branch are writing up a list of all those who have shown an interest in the Socialist Party, but have not yet joined, to send them an appeal letter asking for a donation. While we can't visit car boot sales, many members are looking to sell items on eBay or, like Birmingham North branch, on Facebook Marketplace.

Over the course of the last year, many areas have held successful quiz nights. More are being planned, as well as other types of online events such as the gaming night being planned by Coventry branch and a poetry reading event by members in Brighton.

These are just a few of the many plans we have heard about. We urge every member and supporter to do what they can to help us break through our fighting fund target, and make sure we have the resources to help fund the Socialist Party's election campaign as part of the Trade Unionist and Socialist Coalition. Donate to help us produce the leaflets, posters and all the other campaigning material that is urgently needed to build the working-class fightback.