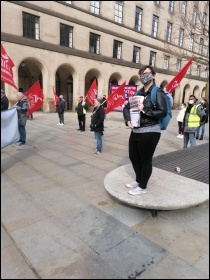 An NHS pay rally was organised quickly and urgently in Manchester on 7 March. As soon as the government announcement was made, trade union branches were inundated and work WhatsApp groups were buzzing. The feeling of anger and need to do something was palpable.

The rally was socially distanced. Around the corner there were groups of people queuing to buy coffee - that was allowed. And the day after, millions of school children returned to school. But we were stopped by the police from protesting about this disgraceful kick in the teeth from the Tory government.

Striking Go Buses drivers from Unite union joined the rally from their picket line. Unfortunately, no one was allowed to speak, apart from to advise the crowd that the rally wasn't allowed to go ahead. And police cleared the area after arresting one woman and handing an outrageous £10,000 fine to the organisers.

Some NHS workers there seemed shocked about what the Tories are doing, but that shock has turned into anger.

One nurse shouted: "Tell the truth about our salaries". Another worker told us: "I have to work extra weekends just to be able to afford the childcare so I can go to work". A porter said: "The increase in our pension contributions took our last pay rise"

Health workers have been suffering under Tory governments for over a decade. Covid has shone a light on the dire state of the NHS.

Due to cuts, hospitals didn't have the required critical care or ward beds to fight the pandemic. Staffing levels have been cut so far to skeleton levels that there was no resilience in workforce levels when NHS staff became ill with Covid.

The irony of the Tories patting themselves on the back for building Nightingale hospitals that can't be staffed wasn't lost on the workers at the protest. We need our unions and the Trades Union Congress to organise a serious struggle to break the public sector pay freeze and to support health workers' demand for a 15% pay rise now.

Rules introduced by Unison to clamp down on democratic debate in the union mean that candidates for union elections cannot 'invite or accept' support 'in money or kind' from any entity which 'is not provided for in Unison rules'. This article has been produced without the authorisation of the candidates, in order to comply with these requirements