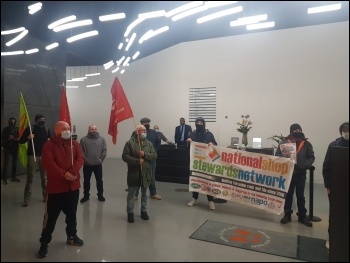 Rank-and-file construction electricians launched their fight against deskilling at the £22.5 billion Hinkley Point nuclear power station with a number of early morning protests on 24 February.

Socialist Party members and National Shop Stewards Network supporters took part as the ‘sparks’ demonstrated at EDF Energy in central London, and also protested in Glasgow, Manchester and Newcastle. It appears that a training course for ‘electrical support operatives’ has now been suspended. This is undoubtedly a fantastic victory and shows what is possible when a fighting lead is given.

But the Unite Electrical and Mechanical Combine has promised that the fight goes on until the bosses “cease their systematic attack on the skill set of electricians and other trades immediately and forever.”

The protests sent a clear message to the electrical contractors that an attempt to deskill the trade, and thereby attack pay, terms and conditions, as they tried to do a decade ago in the Besna dispute, will be met with the same ferocious struggle of protests and walkouts that defeated the bosses then. Two of the Besna companies, NG Baileys and Balfour Beatty, are now at the forefront of the latest dispute.

The electricians are determined that the same old story of making workers pay for the bosses’ profits by using deskilling to attack wages and terms and conditions must be defeated.

This is more vital than ever during Covid and the economic crisis. This pandemic has decisively shown that militant union organisation on the sites is the only way to ensure workers’ health and safety as well as defend living standards.

Unite has come out forcefully against the bosses’ plans. In its statement it says: “The matter has been raised directly with the client EDF who have reacted to Unite’s concerns. All training in this area has been postponed until the problem has been resolved. The disputed standards relate to cabling and containment work the ‘bread and butter’ work for electricians on new build construction projects. Unite was alerted to the substandard training standards at an early stage. There are no electricians working at Hinkley Point C, currently undertaking cabling and containment work, as this phase of the project is yet to begin. Due to the early intervention of Unite, the training of any worker or apprentice at Hinkley has not been disrupted as no one has begun to be trained on the ECTIB’s defective training standards.”

Unite general secretary Len McCluskey said: “Unite defeated the Besna agreement then and we will defeat this latest attempt to deskill electricians. Our message to the industry is clear. Unite and its electrical membership will oppose any and all efforts to weaken the skill set of the trade which will undermine the industry by introducing non-skilled operatives.”

The sparks are determined that any suspension of training has to be permanently ended and, the promise of 500 electrical apprenticeships be honoured at Hinkley. The fight continues, with weekly protests at NG Baileys and Balfour Beatty sites and will escalate up to and including strike action until this attack is defeated.