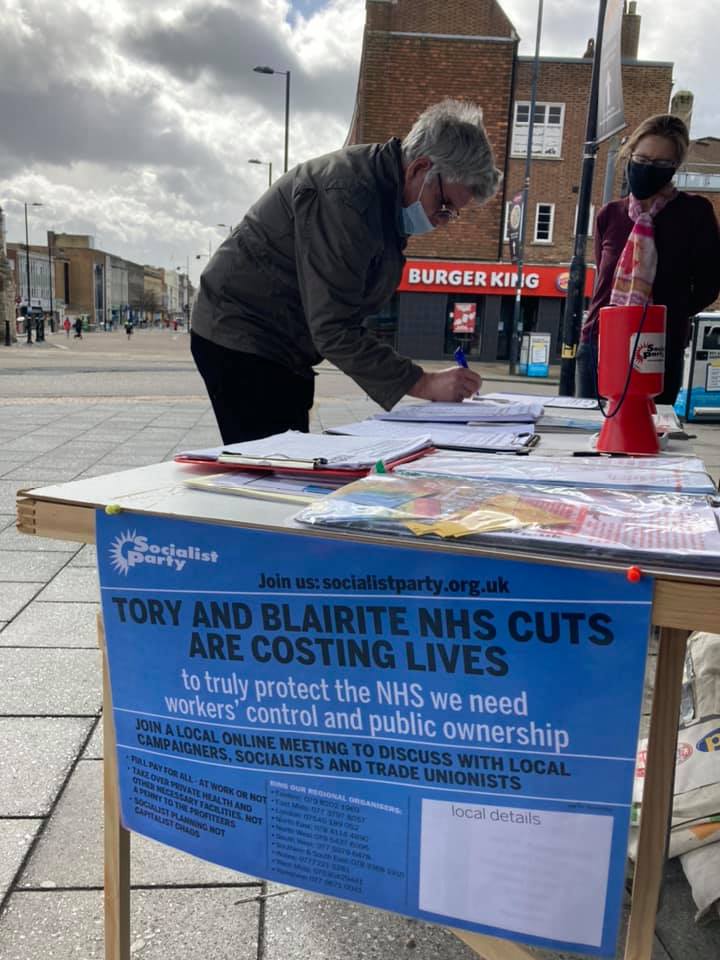 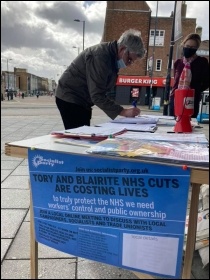 Sticking to Covid guidelines for the election, we set up our canvassing stall in the centre of Southampton near open shops. It was quiet, but a steady stream of shoppers passed us and some stopped to chat. Many were key workers hit by furlough, job cuts and the pandemic. Significantly, some were socialists who wanted to buy our paper and discuss the elections. New Socialist Party member and election candidate Catherine was very bold and enthusiastic, asking everyone to join and consider standing as a candidate. Two left with join cards and the idea of building an anti-cuts alternative in the elections.

We sold 20 copies of the Socialist in Enfield town on 13 March, the first time North London Socialist Party had been able to hold a campaign stall in 2021. There is overwhelming public support for a 15% pay-rise for NHS workers, and overwhelming anger at the Tories. Our stall also happened on the same day many people received their council tax bill, 5% higher than last year thanks to the Labour London Mayor and Enfield council. Our members are standing in the elections as part of the Trade Unionist and Socialist Coalition to demand workers aren’t made to pay the bill for Covid.

People were angry, but not surprised, to hear about Birmingham City Council’s plans to cut another £41 million from services in the coming year. The news that we are standing in a by-election in the area in May was well received as a result.

We kicked off canvassing for our election campaign in the town with a call for key workers at Sandwell Council, in the NHS and elsewhere, to receive a living wage of at least £12 an hour, backing the health workers’ campaign for a 15% pay increase.

Honks, claps and thumbs up – that was the response to the banner drop Leeds Socialist Party members took part in, supporting a 15% pay rise for NHS workers. One student ran across the road to ask what our banners were about and responded “brilliant” when we told him.