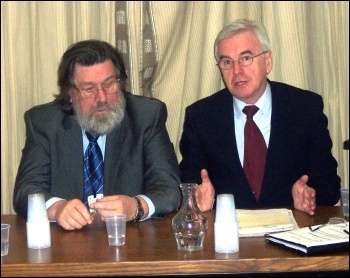 The Shrewsbury Pickets have had their convictions overturned. Ancient 'conspiracy' legislation was used to convict them for picketing during the national building strike in 1972. Socialist Party member Marion Lloyd, who is standing to be president of civil service union PCS, said:

"Solidarity and respect to the Shrewsbury Pickets, their families and all those who have campaigned for nearly 50 years to have their outrageous injustice overturned. We should remember those we have lost during this time, including the heroic Des Warren.

Des, like Ricky Tomlinson, was among six workers who were jailed. There now needs to be an inquiry - headed by the trade unions - into this scandalous framing of innocent workers by the establishment courts, and the subsequent cover-up.

I was a member of PCS's predecessor union CPSA. It was also targeted by the security services, who sought to undermine democratic trade unions that fight for their members.

Our movement has to use this victory as a platform to resist all moves by the Tories to limit our right to protest, strike and picket, and fight all attempts by Boris Johnson's government and the bosses to make workers pay the price for the Covid crisis. Be in no doubt - we stand and fight and we fight to win!"