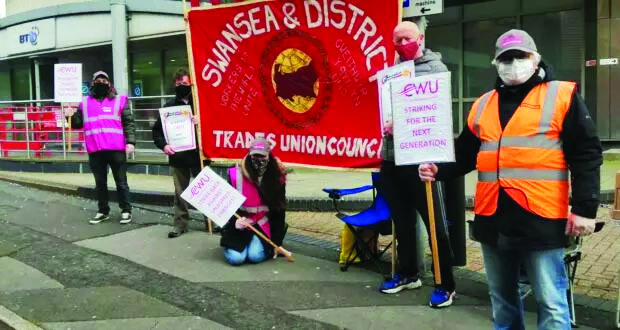 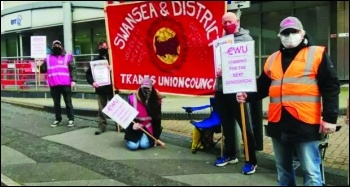 Engineers working for BT’s Openreach have taken five days of strike action against the imposed regrading of their jobs.

As the Newport pickets explained: “For example, instead of advising the council to move a kerb on their plans to reduce the need for expensive telecom engineering work, we would be encouraged in the future to ensure that Openreach carries out work that would unnecessarily cost the council thousands, but create business for the company.”

BT has claimed that current workers would keep existing terms and conditions, but new starters would start with longer hours, no overtime, less sick pay and holidays. And strikers believe that, as has been shown time and again across British industry, this is the thin end of the wedge: “Once 50%+1 of the workforce are on the new contracts then they will try and force the existing workforce onto them too.”

The morale of the majority of strikers on the picket line is high, despite managers trying to intimidate them with petty attacks. Communication Workers’ Union members inside the Newport building have been reprimanded for bringing cups of tea to the strikers!