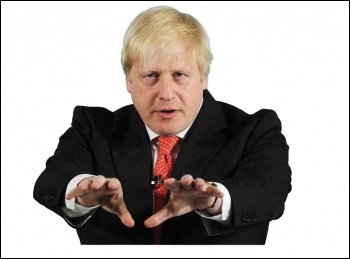 One law for them and one law for us. Nothing summed that up better than Dominic Cummings’ trip to Barnard Castle during the first Covid lockdown.

Now the thieves have fallen out. Cummings’ revelations in parliament have underlined what we already knew – from day one Johnson’s Tories have put the profits and interests of big business and the rich before the health and livelihoods of the rest of us.

‘Herd immunity’ – the reckless risking of tens of thousands of deaths of ordinary people – was official Tory policy at the beginning of the pandemic. At every crucial stage thousands of people unnecessarily died because the Tories didn’t want to upset their friends in the boardrooms by locking down the economy and threatening their profits.

Lucrative Covid contracts have been dished out to those same mates – no questions asked. It’s clear that the Tories want to continue with this ‘crony capitalist’ model for the ‘recovery’ – contracting out public services in health and other sectors to the private profiteers, and centrally doling out money for infrastructure projects in return for votes.

While workers have had a 20% pay reduction on furlough, lost their jobs, had their wages frozen and their hours cut, and fire and rehire on worse conditions is itself becoming a pandemic – the number of billionaires in the UK has reached its highest level for 33 years! 24 extra ‘Covid billionaires’ have been created over the last year.

We haven’t been able to trust the Tories during the pandemic, and we can’t trust them with what lies ahead as they try to make us pay for the Covid crisis. But neither can we have confidence in a Starmer-led Labour Party that has gone along with the Tories’ big business agenda at every stage.

The Socialist Party is campaigning in the trade unions, in the communities and among young people for such a party to be built – and for a socialist alternative to the capitalist inequality and injustice that Covid has so visibly laid bare.