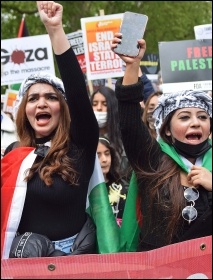 Despite the ceasefire, Londoners' anger at Israel's state terror showed no sign of abatement. 200,000 protesters gathered at Embankment and marched to Hyde Park.

Once again the Socialist Party had a strong showing on the demonstration. From our stands at the start and end of the march, we took our vision - for an end to the conflict through mass struggle and a socialist programme - to the masses of people passing by.

Our placards were distributed in great numbers, and could be seen all over the demonstration. Our marching contingent's call for workers' unity resonated through the crowd.

Thousands of people took our leaflets, with many stopping to discuss our approach in more detail. The climax of this was at the end when we took to the megaphone to spread the word about our approach for a new socialist intifada.

The mood was electric. Our gazebo was deluged by unprecedented numbers of protesters wanting to sign our petition, find out more, and donate to the Socialist Party's fighting fund.

The response we encountered demonstrated resoundingly the simmering dissatisfaction with capitalism, a growing understanding that such injustice is a natural consequence of it, and an increasing appetite for socialism.

Over 500 protesters attended the lively demo in Coventry organised by the trade union council. The protest went on well over three hours, and included two marches round the city centre. Chants echoed round the streets.

When Socialist Party member Dave Nellist spoke to the crowd, he pointed out that not one of the 54 Coventry councillors came to the protest. The only presence from Labour was a statement from Coventry South MP Zarah Sultana. She had also been the only presence from the Labour Party at the previous week's protest.

There were a lot of young people at the event, some told us it was their first-ever protest. We saw this at the 'Kill the Bill' protest a few weeks ago, and Black Lives Matter protests last summer.

Young people have grown up with only austerity, attacks on their rights, and chaotic imperialism, and want to fight for a better world. More and more are drawing the conclusion that the route to a better world, where Palestinians can be truly liberated, is through socialism.

1,000 people marched through Gloucester. The organisers thanked people for coming together, and thanked the Socialist Party for supporting the event. This was the biggest demonstration in Gloucester since the anti-cuts demo a decade ago.

Gloucestershire Socialist Party helped to build for the demo, and three of our members spoke from the platform, one as president of Gloucester Trades Council, the body that coordinates the unions in Gloucester. Our demands got a great response.

The same cannot be said for local Tory MP Richard Graham. Having previously enjoyed a reputation for being 'pro-Palestine', he discovered that the largely young Asian crowd saw through his hypocrisy. Several turned their backs when he spoke, and when he criticised "throwing statues into water", he was duly drowned out by chants.

Socialist Party members attended the 2,000-strong demo. People from across Birmingham travelled to Victoria Square to show their anger.

The crowd was energised. A large number of young people came out to protest, and many protesters had personal connections to the issue.

Attendees were keen to speak to Socialist Party members about the connection between the situation in Palestine and the situation in the UK. Protesters were extremely receptive to ideas about a socialist programme of change - both locally and in the Middle East.

There was an impromptu march through the city centre, which drew attention from many more people in the city. Lots of people asked when and where the next demonstration would be, eager to continue the struggle.

What started as a small march from the mosque on Stapleton Road soon swelled to a noisy march of 3,000. Unlike the protest seven days previously, which was confined to the city centre, this march cut through local communities on its way to College Green and City Hall.

The overwhelming mood was of righting the wrongs done to the Palestinian people, and demanding an end to Israeli state aggression. The march was awash with flags, chanting and hooting car horns.

The protest grew from 150 people to 300 as it marched from the forest to Old Market Square. People in the crowd that we spoke to agreed with the Socialist Party on the need to build mass working-class movements of Palestinians and Israelis to end Israeli state brutality, and that the working class was the only force that could end the brutality permanently.

Two protests against Israeli attacks on Palestine were organised in Liverpool. One by the Palestine Solidarity Campaign, and one by students and other young people.

This latter one was by far the best attended. 200 people gathered around a large, outstretched Palestinian flag.

An impromptu march from the main shopping street to Williamson Square, ended up outside BBC Radio Merseyside, protesting about biased BBC reporting on the issue. And many more young people joined the protest after it had begun.

The quiet cathedral city of Lichfield in Staffordshire saw a protest of 30 people on Sunday 23 May. A key reason for the protest was a disgraceful recent tweet by local MP Michael Fabricant describing pro-Palestine protesters as "primitives... trying to bring to London what they do in the Middle East".

Socialist Party members were invited to address the protest, putting forward our position of mass struggle by Palestinian and Israeli workers to end occupation and conflict in the region. And a third of the protesters bought a copy of the Socialist.

Several hundred people protested. Two women had a homemade Angela Davis poster, making the connection between Black Lives Matter and the situation in Palestine. They said it was the same struggle.

A mum and two young children were chalking slogans. She was saying her son had become interested in wider issues. The children were a bit nervous about attending a protest, as they had heard they were all violent. But they wanted to come and show their support.

"We are thousands, we are millions! All of us are Palestinians!"

In Newcastle, 500 joined waves of protests across the planet. Our Socialist Party stall attracted a lot of attention. People were interested in hearing our distinct socialist message - 26 protesters bought a copy of the Socialist.

One young Muslim woman we spoke to told us she was concerned about the potential for antisemitism, and agreed when we put forward the need for Palestinian and Israeli workers to reach out and fight their common enemy - pro-capitalist bosses and politicians.

Socialist Party member Mike Whale, president of Hull TUC, spoke at the protest. He outlined Hull TUC policy - taking up the social justice issues facing Palestinian and Jewish workers as a way to promote solidarity, and for them to build a mass movement to end the Israeli state terror and oppression.

Many of the young speakers spoke passionately, expressing their anger at the injustice. A one-minute silence was held for the children and victims of the attacks on Gaza. After the rally, the youth chose to undertake an impromptu march around the city centre chanting: "Free Palestine".

350 people marched. This demonstration was larger and more enthusiastic than the previous week. Northampton Socialist Party branch will be holding a meeting to discuss what can be done beyond the protests.

Even where protests didn't take place, Socialist Party members were campaigning on the issue:

In Carlisle, we had a very lively campaign stall. Many young people and ordinary working-class folk chose to come over and talk to us, sign our petition and take leaflets outlining our programme for Israel-Palestine. Several of them thanked us for what we were doing, and wanted to discuss with us further.

Unlike many cities, there has been no big demo in Carlisle. However, we were able to show that there is considerable support here for the Palestinian people.

Our youth campaign stall outside the Conel College in Seven Sisters, north London, received a great response. Dozens of college students and other passers-by saw us campaigning and signed our petition.

We are definitely going to hold more youth stalls outside colleges across London to meet young people who want to fight for jobs, homes, services and a future for all. Ten people bought a copy of the Socialist, and we raised another £25 for our fighting fund.