In June 1971, the privately owned shipyards of Upper Clyde Shipbuilders collapsed into receivership. But instead of accepting redundancy, the large workforce occupied the affected sites and began its famous 'work-in'. The following article by Bill Mullins is dedicated to those workers who fought this battle, and to the new generation of workers fighting capitalist-imposed redundancies, 'fire and rehire', and other attacks, which began in earnest during the Covid-19 crisis. 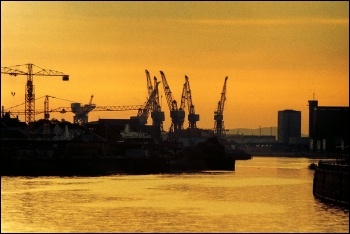 This year marks the 50th anniversary of the gigantic struggle by Clydeside workers to defend their jobs and the communities that were reliant on the shipyards in that part of Scotland.

In the summer of 1971, 13,000 Clydebank shipyard workers occupied their threatened yards for over six months, and continued to turn out ships during this 'work-in', despite the bosses' attempts to close the last four of the five yards in the area.

Their struggle was supported not only by workers in Scotland, but throughout the UK and across the world.

Workers everywhere were inspired by the marvellous sense of unity created by the Scottish working class as it fought back against a brutal attempt by the new Tory government of prime minister Ted Heath to end support for what were infamously dubbed by the Tory industry minister, John Davies, "lame duck" industries.

At one time or another, organised workers across Scotland came out on strike (joined at times by workers in the north of England) in the long battle to save the jobs of the Clydeside workers.

Tens of thousands took to the streets of Glasgow in massive demos ending at the famous Glasgow Green (where revolutionary socialist John Maclean led mass working-class demos against capitalism during and after World War One) and swore that they would not allow the shipyards to be closed.

While we remember the battles of the Clydeside workers in 1971, we also have to learn the lessons from it - both the good and the not so good - particularly when it comes to the political, as well as the industrial strategy, adopted at the time.

In June 1970, the new Tory government came to power committed to a strategy of ending state support for 'uncompetitive' industries.

This was at a time when British capitalism was coming under extreme pressure in its markets across the world as a result of the rise of new developing nations following the destruction of World War Two.

In shipbuilding, the Japanese and Korean industries were taking off and undercutting British shipbuilders.

British owners had refused to invest in modern machinery and were now paying the price as they were edged out of their markets.

On the Clyde, the previous Labour government in 1968 had consolidated shipbuilding into a consortium consisting of four yards (plus the profitable Yarrow Shipbuilders, which then left the consortium in 1970).

The yards, with 13,000 workers, were: Fairfield in Govan, Alexander Stephen in Linthouse, Charles Connell in Scotstoun, and John Brown in Clydebank.

UCS now found itself in dire straits when the Tory government loudly pronounced its policy of no government support for the shipbuilding industry, among others. In June 1971, John Davies refused the request by UCS for a small bridging loan of £6 million (1971 prices).

In response to this, 200 trade union shop stewards from the yards met on 12 June and vowed to fight the closures threat.

At a mass meeting the following day, the workers unanimously agreed to the shop stewards' proposal for a 'work-in'.

This had, it seems, been the strategy adopted by the leading group of four senior stewards earlier, including Jimmy Airlie and Jimmy Reid.

Three of the four senior stewards were members of the Communist Party, and it was clear that this was their strategy.

Earlier this year the Morning Star newspaper, commemorating the UCS work-in, said the work-in "precipitated over 100 other occupations". And that the strategy of the party was to build an "anti-monopoly alliance".

It went on to describe how they wanted to expose the split between the city of London and the big monopolies against the community of small businesses that relied on the continuance of the shipyards in the west of Scotland in particular. They adopted, he writes, the slogan of "defend Scotland's economy".

They proposed the coming together of the Scottish trade union movement (the STUC) along with "regional businesses" into a "Scottish assembly" for the future of a "civic Scotland". This was clearly what lay behind the tactic of the work-in.

Later on, as the work-in proceeded, it exposed some of the practical difficulties that this tactic had created.

For example, at one stage, even though the shop stewards had successfully stopped the government's 'official receiver' from entering into the yards, he nevertheless announced, on 1 September, the redundancy of 399 workers in the first wave of the plan to close all four yards.

The shop stewards had committed at the mass meetings that they would raise the money to pay the wages of the workers under threat. Though there was massive support for the struggle, including financial support, it was going to be an obvious uphill battle to make good that promise.

The 1970s was a period of intense struggle by the organised working class as British capitalism sort to off-load the crisis it was facing onto the backs of the working class.

The attacks on jobs and living standards had precipitated enormous waves of struggles, including occupations of workplaces under threat of closure.

But most of the occupations involved directly the most active worker militants, who looked in turn to the support of the labour and trade union movement. In this context, there was a direct comparison with what was happening on Clydeside.

The UCS work-in lasted well over six months and it involved many examples of the widespread support of the rest of the working class.

The STUC called, for the first time in its history, a special conference on 16 August 1971, at which a resolution to organise a one-day stoppage and a demo in support of the UCS struggle was carried unanimously.

On 18 August, over 200,000 workers stopped work in Scotland and 80,000 went on the demonstration through the streets of Glasgow.

The main demand of the crowd was 'four yards stay open or none do'. This was in response to the rumours that the Tories were beginning to backtrack and look to the private sector for somebody to take over one or two of the yards.

Eventually, by February 1972, the government was forced to step in and commit to supporting a number of companies with government money to take on shipbuilding on the Clyde.

It committed to spend what was then the enormous sum of £35 million to push through the deals.

The restructuring of the yards took place with two of the yards, Govan Shipbuilders and Scotstoun Marine being set up. John Brown was sold to the Texan company Marathon Oil to make components for the North Sea oil rigs.

Was the UCS occupation leaders' strategy of looking to regional capitalists for support, correct? In my view, no. It undoubtedly led to compromises with these capitalists rather than an all-out struggle by the organised working class.

The best comparison is Militant's (forerunner of the Socialist Party) tactic in the Liverpool Marxist-led council struggle against the Thatcher government's spending cuts in the mid-1980s.

Then, Liverpool's socialist council relied solely on the willingness of the organised workers, both in the council and in the wider region, to fight to the end. The struggle won millions in additional funding to maintain the council's job creation, mass housebuilding, and urban regeneration plan.

You do not necessarily turn away support from small capitalists if offered, but this section of society, with a foot in both the capitalist and workers' camps, cannot be allowed to determine the tactics and strategy of the struggle to save jobs and the shipyards themselves.

Moreover, nowhere in the whole battle, it seems, was there the central demand to nationalise the yards under democratic workers' control. But without that central demand, you end up having to look to the private sector to save the day.

Undoubtedly, the UCS battle put a large spanner into the Tory strategy of letting 'lame ducks go to the wall', and Ted Heath was forced to backtrack on many other issues before being unceremoniously kicked out of office in February 1974.

UCS will long be remembered as a very important part of the battles of the organised working class during that tumultuous decade to defend jobs, living standards and communities.