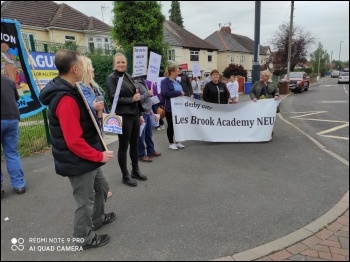 Teachers, members of the National Education Union (NEU) at two Derby schools - Lees Brook Academy and Merrill Academy - were out on strike for a full day on 1 July. Both schools became part of Nottingham-based Archway Learning Trust in February 2021.

Archway Trust has embarked upon plans for a brutal 'reorganisation' at both schools, which will involve job cuts, replacement of qualified teachers with less qualified staff, increases in class sizes, and changes to curriculum that will mean a reduction in student choice in modern languages, arts, music, PE, drama and humanities. In addition, pastoral care and counselling provision will be severely curtailed.

NEU officers, reps and staff say they have been "ignored and frozen out by a distant trust." Archway Trust refuses to budge and negotiate further and has not acknowledged the dispute. Even so, management at both schools announced closure for the day.

I was welcomed on the picket line at Lees Brook School, where around 30 staff carried placards and banners, and distributed leaflets. There was a general mood of enthusiasm and determination for their fight. Two further strikes have been planned for 13-14 July.

This is undoubtedly an important and necessary fight. Education trusts are cutting costs and jobs, and attacking employment conditions throughout the country in order to increase profits, pay large salaries to executives, and bully staff into submission at the expense of employees, pupils and the local community.