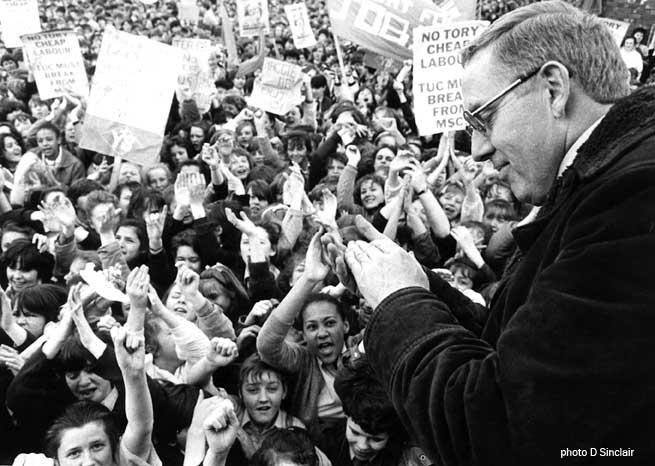 On 11 July 1991, Terry was imprisoned for refusing to pay the Thatcher government’s hated poll tax. He was released on 6 September, having served 58 days in Walton Jail as prisoner DV 3695. 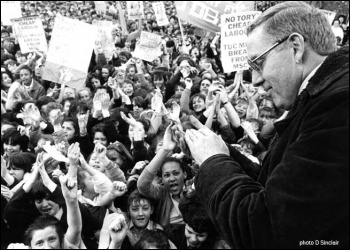 The battle to defeat the poll tax was the most extensive civil disobedience campaign of the 20th century in Britain.

Tory Prime Minister Margaret Thatcher wanted to shift the burden of paying for local services from the rich by making working-class families pay far more. It meant that a multi-millionaire living in a mansion would pay less than two low-paid adults living in a one-bedroomed flat.

The tax was introduced in April 1989 in Scotland and a year later in England and Wales. It was described as Margaret Thatcher’s ‘flagship’ legislation. We turned it into her Titanic!

By November, the captain went down with the ship, as a mass non-payment movement of millions of working-class people, led by Militant, so frightened Tory MPs that they forced Margaret Thatcher to resign.

Local authorities (mainly Labour) initiated over 25 million court cases from April 1990 to September 1993 seeking punitive action against those unable or unwilling to pay the tax.

Once a magistrates’ court confirmed a poll tax debt, by issuing a ‘liability order’, further refusal to pay led to deductions from wages or benefits, or up to three months imprisonment.

He got a great reception: “My cellmates already had a Free Nelson Mandela poster on the wall. They had crossed out Mandela and written ‘Free Terry Fields – pay no poll tax – vote Labour’.”

Outside, Terry had his supporters too. 2,000 marched to a ‘Free Terry Fields’ rally outside Walton jail, where Arthur Scargill (the miners’ union leader) was the main speaker.

Prison officers saw Terry as different. One said: “Management can’t handle Terry… they expect him to be demanding special privileges for himself, but as each day passes, Terry blends in with the rest of the prisoners. Not one of the prisoners said a bad word about him. Quite the opposite. The prison officer in charge of Terry’s wing has joked that there is no need for the usual applications for things by prisoners now because Terry will be holding a prisoners’ surgery on the landing!”

Inside the prison, Terry was still the Labour MP for Liverpool Broadgreen. Outside the prison, views were mixed. In the Daily Mirror, Anne Robinson (now the presenter of Channel 4’s Countdown) said: “I’ve known Terry since I was a child, and he was a fireman. He’d give you his last penny. He’d fight to the death if you thought you were a victim of injustice. I loathe everything Militant stands for, but it’s difficult to condemn one of their most fervent supporters when you’ve only ever known him as a thoroughly decent guy.”

However, Labour’s leader, Neil Kinnock, was prepared to condemn those advocating mass non-payment of the poll tax. According to Kinnock, we were “toytown revolutionaries”. At the September national executive committee of the Labour Party, Roy Hattersley and Clare Short proposed Terry’s and my expulsion. Neil Kinnock said: “The Labour Party does not and never will support breaking the law. Mr Fields has chosen to break the law, and he must take the consequences. He is on his own.”

As an editorial in Militant (forerunner of the Socialist) said: “No one expects the Labour Party leader, or any rank-and-file members, to support theft or drunk driving. Throughout its history, the working class has been forced to defy laws that blatantly served the ruling class. Four years ago, at party conference, Kinnock presented Labour’s merit award to a 102-year-old suffragette who was ‘jailed for a day for breaking into the House of Lords’ (applause and cheers). If those women were using the same methods to fight for their rights today, would Kinnock tell them they were on their own?”

Parliament is not designed for socialists. Actually, that’s not entirely true; it’s intended to emasculate socialists. But Terry Fields wasn’t to be bought. For a start, as with Militant supporters then and Socialist Party members now, when elected to public office, he only took from his parliamentary salary the average wage he had received in his previous job (for 26 years) as a firefighter.

He never took a drink in parliament. If the Commons finished early enough, he would go to Peckham Labour Club instead.

It was said that Terry didn’t ‘like’ parliament. In fact, he hated it! But he took it seriously, making almost 400 interventions, speeches and questions, in his nine years.

Some of his campaigns arose from casework, such as how he successfully forced the government in 1987 to change the regulations on child-resistant packaging following the death of a child, making screw tops mandatory on household bleach. But most of his work was outside the Commons, in hundreds of meetings with working-class people, supporting strikes and campaigns.

Terry made few foreign trips, and when he did, they had a purpose. For example, the delegations he went on to Israel to build solidarity with Israeli and Palestinian activists and to support, in particular, a Palestinian trade unionist and socialist falsely imprisoned for ten years by Israel’s secret service. Or to the Russian mining areas of Novokuznetsk in Siberia to address a congress of hundreds of delegates from independent trade unions.

His speeches in parliament could be powerful, such as following the tragedy of the fire at the King’s Cross station in London in November 1987. 30 people were killed, and Terry, with his lifetime of work in the fire service, lambasted governments waiting for tragedies before bringing in safety legislation.

There are many ways MPs used Parliament in the 1980s (and I suspect it’s not too dissimilar today) as a club, as a travel agent, as a rung on a career ladder.

For Terry, it was a platform, the chance to expose the workings of society and its government, and the real effect that had on working people.

As Scottish revolutionary socialist John Maclean, famously said: “Rise with your class, not out of it.”

In a letter to his constituents in July 1991 from Walton Jail, Terry wrote:

“I am no martyr. I did not wish to go to prison, to be separated from my family. I know from many of my constituents just how appalling prison conditions are. But I was elected to defend your interests. If imprisonment is the price for being principled, for saying what I mean and meaning what I say, so be it. Hopefully my stand will hasten the complete abolition of the poll tax.

The Tories and their rich friends in industry are the ones who should be on trial. They have destroyed our NHS, underfunded our education system, and condemned our children to a life on the dole. The fat cats in industry reap in profits one day, award themselves obscene pay rises and sack workers the next. These are the real criminals, guilty of crimes against all of us.

I remain at your service, standing with you against injustice, feeling privileged to represent you. I will not rest until all my constituents are free from the fear of poll tax debt, bailiffs and jailings.”