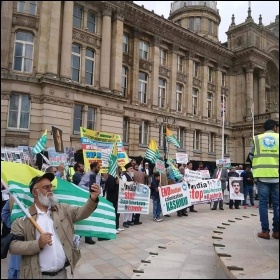 500 Kashmiris, from all over the Midlands, protested in Birmingham on 15 August. They were calling for the removal of all Indian military forces from their land. It was the second anniversary of the removal of Kashmir's special status by Narendra Modi's reactionary Hindu chauvinist Indian government.

Despite being confronted with enormous military force, the Kashmiri people show no signs of accepting permanent annexation by India, and the discrimination that accompanies it.

It would be a grave mistake to rely on either the equally reactionary anti-worker government in Pakistan for national liberation, or the 'diplomacy' of the world's major imperialist powers. US President Joe Biden has delivered a very mild rebuke to the Indian government. Biden is more concerned with defending US geopolitical interests in the Indian sub-continent than the welfare of the Kashmiri masses.

Kashmiri workers and peasants can only rely on their own strength and organisations to achieve national liberation, and urgently need to form a party of workers, peasants and poor farmers, armed with a socialist programme, to take over the land and major industries in the region, so that Kashmir can be governed in the interests of the masses.