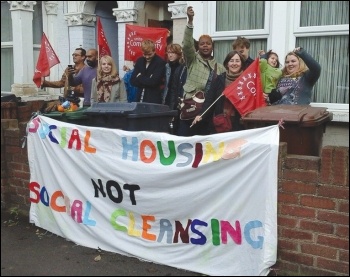 Cornwall's housing crisis was brought into sharp focus on Friday 17 September, when four bailiffs, backed up by five police officers, turned up at Mike Osbourn's rented property in Penryn, near Falmouth.

I was among twenty-plus members of tenant defence union Acorn, who gathered to block the entrance to Mike's house. We watched as the bailiffs arrived and walked past to consult with police, who had already arrived in two cars and a van. The bailiffs then approached and spoke with Acorn's appointed liaison person, Elly. A police officer who intervened, referred to the bailiffs as "our colleagues."

Confronted by a determined human barricade, bailiffs and police retreated down the street. When, after about 20 minutes, the bailiffs drove off, followed soon after by the police, it looked like victory had been achieved.

This was only a bluff, as they returned an hour later. This time, the bailiffs forced their way through, throwing people aside and breaking down the wooden gate. Police, whose opening remark was "we're here to prevent a breach of the peace" were at their backs, aware of everything and oblivious to calls to take action at the assaults being carried out.

Bailiffs had a go at breaching the second line of defence outside the tenant's door. But when it became obvious that there was no way through without an escalation of the violence, police called off the operation.

This was a morale-boosting victory for the fledgling Acorn branch in Falmouth. Any further attempts to dislodge Mike, before he has found somewhere to live, will be defended.

Mike, who has been living in the quiet residential street for four years with his son Max, was given notice late last year. Since then, he has been unable to find alternative accommodation as rents skyrocketed. He appealed to his landlord, in advance of Friday's confrontation, with a list of demands.

It now looks like a tenancy may be available in Truro, ten miles away. It was not possible to complete the move before Friday and the landlord refused to postpone the planned eviction.