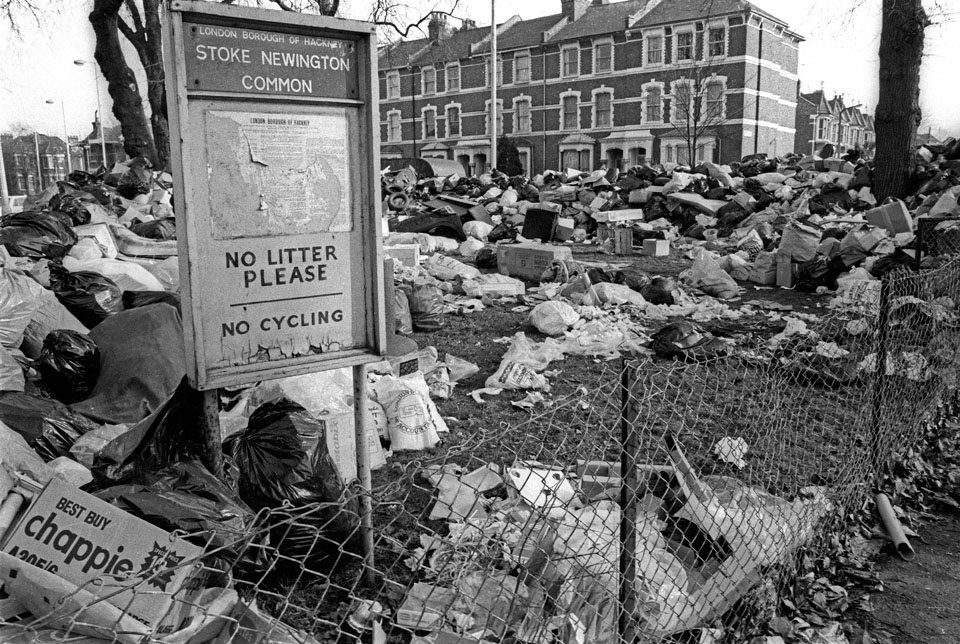 A combination of the rising cost of living, low pay, tax increases, and fuel and food shortages has led some commentators in the establishment media to talk about the possibility of a new ‘winter of discontent’. In an article first published in 2004, Kevin Parslow explains what really happened in the winter of 1978-79. 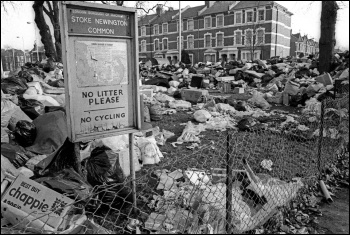 On 28 March 1979, the Labour government of Prime Minister James Callaghan was defeated by one vote in a House of Commons motion of no confidence. Already in a minority, all the opposition parties voted against it and the government’s time was up. In the subsequent general election, the Tories led by Margaret Thatcher gained an overall majority of 44.

Some, mainly the right wing of the Labour Party and trade unions, joined capitalist commentators in blaming the ‘winter of discontent’ for Labour’s defeat, believing voters took fright at trade union power. In reality, many workers sat at home, disgusted with the Labour government’s policies and particularly those of wage restraint that benefited nobody except the bosses and the rich.

It could have been different. When Tory Prime Minister Edward Heath called a general election during the 1974 miners’ strike and the three-day week on the theme of ‘who rules Britain?’ voters said, ‘you don’t!’ Labour, then led by Harold Wilson, was elected as a minority, which was then extended to a small majority in October 1974.

There was enthusiasm for socialistic policies in Labour’s manifestoes, such as nationalisation of the aerospace and shipbuilding industries, an end to pay beds in the NHS and more.

But the government stayed within the confines of the capitalist system and the increasingly sickly British economy. Chancellor of the Exchequer Denis Healey, having promised to “make the pips squeak” of the rich with a wealth tax, was confronted with a big business investment strike, inflation of nearly 25%, and rising unemployment.

As the 1976 Labour Party conference approached, Healey went cap in hand to the International Monetary Fund for a loan. This was conditional on savage cuts in public expenditure and the chancellor was howled down at the conference. The government had put its fate firmly in the hands of international capitalism.

Workers had expected more from Labour’s government, having struggled mightily against Heath’s anti-working class policies. Workers hadn’t fought hard to get capitalist policies from what they considered then as their government.

But some of the same leaders who had been forced to lead the mighty struggles of the early 1970s, such as Hugh Scanlon of the Amalgamated Union of Engineering Workers (AUEW) and Jack Jones of the Transport and General Workers Union (TGWU), [both predecessor unions of Unite today] helped prop up the Labour government by acquiescing to its pro-big business policies.

After all, wasn’t the alternative worse? The Tories had booted out Heath and elected Thatcher as their leader. She was bent on revenge against the trade unions and proposed vicious anti-working class policies. Many union leaders believed the only way to prevent her ascent to power was to support the Labour government, led since May 1976 by Callaghan, in whatever it did.

The social contract, an agreement between the Labour government and the trade unions, was used as a cover for wage restraint. From September 1975, union leaders agreed to a voluntary £6 a week limit to wage rises; in 1976, things got tougher for workers, with ‘Phase 2’ a 4.5% norm, with a £4 a week maximum; and then ‘Stage 3’ in 1977 limited increases to 10%.

Workers were much more loyal to Labour than they are now. The government was far more susceptible to pressure through the trade unions and constituencies. The ranks of the Labour Party were fighting for socialist policies, and for party democracy to ensure MPs carried them out. But the union leaders’ acceptance of the pay norms confused and demoralised workers.

Labour lost by-elections in what should have been safe seats, and made a pact with the Liberals to stay in power. This, of course, ensured no return to any form of socialist policies.

The government got a warning in the winter of 1977-78, when firefighters took strike action for a 30% wage increase. They were out for ten weeks, without strike pay or, scandalously, any official support from the Trades Union Congress (TUC). They settled for 10% but also a promise of cuts in hours and new shift systems, which would improve their conditions. They had not won decisively but had shown what strike action could achieve.

Meanwhile, the poorest half of the population had seen their share fall from 7.1% to 5.6%! So much for a “fundamental and irreversible shift in the balance of wealth and power in favour of working people and their families”, as promised in Labour’s election manifesto of October 1974!

Workers had had enough. Trade union leaders felt the ground shifting under their feet. Trade unionists felt their feet moving out of the workplaces. In September 1978, in response to their employer’s 5% offer, 57,000 Ford workers spontaneously walked out of their factories!

They knew Ford had made £270 million profits the previous year and could afford a decent pay rise. They didn’t go back for nine weeks, until accepting an offer amounting to 9.5% on basic pay, plus 2% on holidays and 5% on attendance allowances. The government’s flagship pay policy had been hit below the water line!

Callaghan baulked from calling a general election in the autumn, with Labour just ahead in the opinion polls. But the Ford victory opened the floodgates. A motion moved by Militant supporter Terry Duffy of Liverpool Wavertree Constituency Labour Party at party conference pulled the trade unions behind it, and was passed. Labour’s conference opposed the Labour government’s pay restraint!

Car workers were often portrayed by the bosses’ press as being well-paid. Large sections weren’t. But as the Ford workers settled in November, low-paid bakery workers began a strike against the big monopolies of the Bakers Federation that lasted for six weeks until the new year.

They achieved an increase of £6 a week (on basic wages of just £42), representing a 14.4% rise. However, the bosses wrung out concessions from the union on workplace organisation and conditions.

Train drivers in the Aslef union struck. Lorry drivers took strike action in the New Year. Tories and their press fulminated against the power of this section of the working class, who dared to decide what could be moved as ’emergency supplies’ and what couldn’t.

Thatcher screeched in parliament: “Now we find that the place is practically being run by strikers’ committees… They are ‘allowing’ access to food. They are ‘allowing’ certain lorries to go through… They have no right to prevent [lorries] from going through.”

The Daily Express ranted about “The Rule of Fear” and called for “excessive union power to be curbed”. Scandalously, the TUC leaders buckled under the pressure and recommended that ‘secondary picketing’ of workplaces other than a striker’s own, should be discouraged. This gave the green light to Tory anti-union laws. Lorry drivers eventually settled for £65 for a 40-hour week, amounting to a 21% increase.

Public sector workers then launched their campaign. Often called the ‘dirty jobs strike’, it comprised low-paid workers in local authorities, the NHS, the water industry, ambulance workers and other public sector groups. Their claim was for a modest £60 a week for 35 hours. This was still only two-thirds of the average industrial wage.

Alan Fisher, then general secretary of the National Union of Public Employees (NUPE), wrote an article on the front page of Militant entitled: “Wipe out poverty wages now”.

Following a demonstration of 80,000 in London (on a Monday!), members of the TGWU, the General and Municipal Workers Union [now the GMB] NUPE, and the Confederation of Health Service Employees [COHSE – with NUPE two of the founders of Unison] took action across the country. It spread like wildfire as workers galvanised around demands that were worth fighting for.

The press spat out their venom: the London Evening Standard had a headline “Plagued by NUPE’s rats”; the Birmingham Evening Mail, “A four-letter word, NUPE”. But most people believed that low-paid workers deserved a decent wage.

Despite massive police intimidation and the vitriol of the Tories and their press hirelings, workers remained solid. Employers were forced to offer a 9% increase and the promise of a “comparability study”. This still brought the basic wage for many workers to only £42.40 for 40 hours!

NUPE’s negotiators and Alan Fisher accepted it but the national executive rejected it. This confused the membership: in subsequent ballots, local authority workers in NUPE accepted their offer by a 6 to 4 majority but NHS ancillary workers and ambulance workers rejected it by 4-1 and 7-1 respectively!

The confusion allowed the national committees to settle the dispute and the ‘dirty jobs strike’ was over. But the strike was a step forward for hundreds of thousands of low-paid workers who had taken action for the first time.

Civil servants then took action for their claim, which again broke the pay guidelines as it was settled just before the general election. But Labour could not be saved, roundly defeated by Thatcher’s Tories. Unfortunately, the TUC leaders were found wanting in attempting to counter Thatcher’s pro-big business policies and attacks on union rights.

In 1979, 12 million workers were organised into trade unions. If they had leaders prepared to fight for socialist policies, history would have been different. Instead, we have to learn the lessons of this battle, and the course of history since, in order to rebuild the trade unions as fighting organisations.

The ‘winter of discontent’ showed that when workers can take no more, they will struggle, and struggle hard. Days like these will come again, and socialists have to be prepared to ensure a better outcome than in 1979.