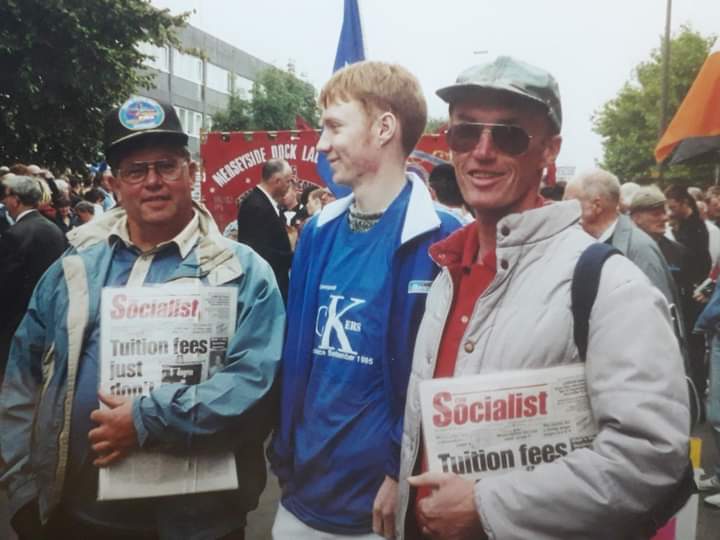 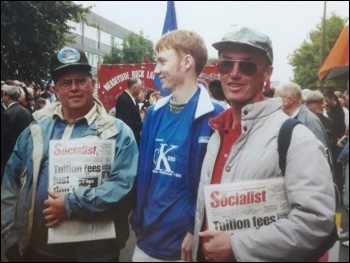 Socialist Party member Tony Davison, from Beverley in East Yorkshire, has sadly passed away. He will leave a huge hole. Our thoughts are very much with his wife Sue and his family.

Tony was a working-class fighter and socialist all his adult life. In the 1960s, as a young man, he worked on ships and travelled widely, including Australia, where he worked on building sites.

Tony often mentioned his visit to apartheid South Africa. He was horrified at the injustice he saw. He had to be hastily bundled onto his ship, because he was about to intervene to stop a racist incident. This helped him realise that the whole system needed changing.

Back in England, working at Easington gas terminal, he met Trevor Grewar. Trevor got him to join Militant (now Socialist Party). Tony promised to “give it his all for the next ten years”. In fact, he was an active member for nearly 40 years. He attended Hull and District Trades Union Council just four days before he died.

Tony saw his working life as an opportunity to talk to other workers and encourage them to get organised in workers’ struggle. In the 1980s, each week Tony and Trevor sold 60-plus copies of the Militant (now the Socialist) on building sites, raising thousands of pounds for the fighting fund.

He was once asked: “Do you actually do any work?” His response: “I work for Militant, but Laing’s pay my wages”.

Tony saw Marxism, or “real socialism” as he called it, as a key guide to his activism. Without a thorough ‘book’ education, Tony would bring his experience from the workplace and life to theoretical discussions. He could always cut through to the essence of a problem.

He developed an encyclopaedic knowledge of the history of US workers’ struggle. When he spoke about America at meetings, it was a highlight for members in Hull Socialist Party.

It wasn’t just the US workers’ movement that attracted Tony. He loved Elvis Presley, and 1950s rock and roll. Tony and Sue were expert jivers.

When the Tories attacked workers with the poll tax in the 1980s, Tony built an anti-poll tax union in Beverley. The traditionally conservative town was extremely effective in its support for non-payers.

Tony never hid his politics. He linked the struggle against the Tories and the poll tax to the struggle for socialism. Socialist Party member Phil Culshaw recounts that so many people wanted to buy the Militant newspaper that he had to come help Tony deliver it.

Tony was a member of the GMB union. He spoke brilliantly at GMB conference about how it’s the working class which runs society, telling conference: “So let’s march forward and take power.” To the consternation of many in the right-wing GMB bureaucracy, he was cheered to the rafters, and left the platform to a standing ovation. He particularly enjoyed that experience, as he would always point out that the trade union and Labour Party leaderships were the biggest barrier to achieving socialism.

In recent years, despite failing health, probably linked to his time working on ship’s boilers, he continued to be active, supporting Socialist Party campaign stalls, and participating in the trades council.

He was a regular attender at the annual Socialism events. On the journey from and back to Hull, Tony would use the time to entertain us with stories, jokes and songs. The younger comrades loved him, and hung on his every word.

Even in difficult times, Tony would always be there, often with his favourite pork pies sourced from Driffield or veg grown in his garden. “Now then”, he would say, “when the going gets tough, the tough get going”. His enthusiasm was infectious.

Many who knew him referred to him as a “gentle giant”, but he had a rod of iron running through him. His determination to see things through was renowned. Alan Shadforth remembers when an idiot spat at his sister on a socialist paper sale, Tony picked him up and nearly threw him through a window.

Even in later years, Tony, together with Sue, were the fastest leafleteers for the Trade Unionist and Socialist Coalition (TUSC) in Hull. They delivered more leaflets than comrades half his age.

Tony had great faith in the younger generation. He was very proud of the new young activists that have joined the Socialist Party in recent years. He did everything to encourage and support them. When his own granddaughter Kirstie participated in the climate protests and Black Lives Matter, his pride knew no bounds.

We have lost a giant. Memories and comments are flooding in from activists who knew him. The stories and anecdotes about Tony would fill a book.

There are tears in our eyes thinking of him. But it’s difficult not to have a smile on our lips at the same time, as we remember an inspirational but very human representative of the working class who loved life.

We are privileged to call him a friend and comrade. Tony’s fight for socialism will be continued by his comrades in Hull, and his determination will inspire us to complete the struggle to change society.