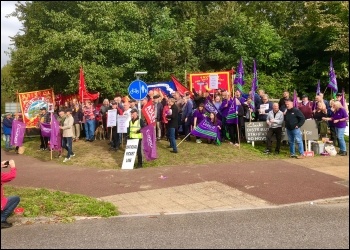 Picket lines of striking Clarks workers were joined by about 50 trade unionists on ‘Solidarity Day’ on 15 October.

Workers at the Somerset-based shoe manufacturers are fighting a brutal ‘fire-and-rehire’ attempt by management. They’ve completed two weeks of an initial four on strike but are determined to continue for as long as needed if the attack on their terms and conditions is not withdrawn.

That resolve was boosted by the support they received, the presence of several other union banners and the almost non-stop beeping of horns by passing motorists. Pickets have been consistent with a well-organised rota system. They’ve also been supported with full strike pay from their trade union, Community.

Strikers spoke to the Socialist about what the proposed changes will mean for them. They will receive a 15% pay cut, down to just £9.50 an hour. They will have to work an extra 2.5 hours a week thanks to the removal of paid lunch breaks. Sick pay and redundancy pay are also being cut. Workers are being given just four weeks to sign the new contracts before they will be sacked. The company are playing hardball with workers while management are still getting pay rises.

Workers feel particularly aggrieved as they have already endured changes that management have demanded. They have faced a six-year pay freeze. The Christmas bonus has been withdrawn. Insultingly, night shift workers were offered a McDonald’s meal instead last year. That shift has since been cut.

These latest attacks are a bridge too far and workers will fight tooth and nail to defeat them.

You can help them by sending messages of support via [email protected] and signing their petition at megaphone.org.uk/petitions/clarks-end-fire-and-rehire