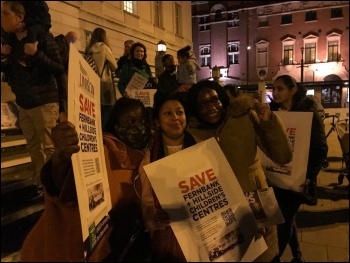 Responding to the closure of Fernbank and Hillside children’s centres in east London, Hackney Labour mayor Philip Glanville claimed: “If we did not have to do this we wouldn’t”.

Pre-Covid, for many months in 2019, Fernbank was running at over 100% capacity, and had a financial surplus. To try and use figures from the Covid period is downright dishonest. Nationally, similar settings suffered a significant decline in attendance.

There is an alternative, and that is to fight, as parents and staff have decided to do.

The workers’ union, Unison, will conduct an official ballot for strike action of all its members at the two centres to stop the closures and job losses.

Mayor Glanville and all Labour councillors should use council reserves in the interim, and join us in demanding the government returns the £140 million it has stolen from Hackney in the last decade. The Tories have given billions of pounds to their rich mates, a few crumbs from this cake would solve Hackney’s problems.

The Trade Unionist and Socialist Coalition (TUSC) is helping to draw up a People’s Budget that spells out the needs of the population of Hackney, and the bill should be presented to the government. If Labour councils adopt this fighting strategy, local community campaigns, trade unions, and the wider population would be only too willing to join them.

If this does not happen, many will draw the conclusion that we need alternative candidates in next year’s local elections. TUSC is ready to stand against those parties implementing budget cuts.