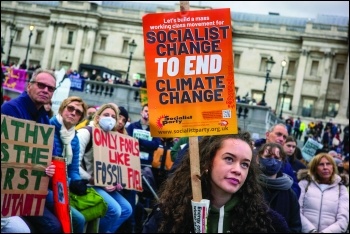 COP26 is one week in at the time of writing, and a set of headline pledges and agreements have been made between many of the world's capitalist nations. Sadly, and expectedly, none of them will come close to resolving the climate crisis, even if the promises are kept.

The fossil fuel industry has the biggest delegation at the summit, more than from any individual country. That sets the tone straight away. The industry's giants are there plainly to pretend to be sincere about climate change.

In recent months we've seen them continue decades of work stalling and amending legislation and reports on climate change. Even weeks before COP26, coal and oil producers tried to water down an assessment by the Intergovernmental Panel on Climate Change (IPCC).

The agreements that come out of this event will have been subject to approval by the same bosses and bankers who are still subsidising the destruction of the planet.

The summit's first major deal was 110 leaders promising their nations would end and reverse deforestation by 2030. It's an important goal to fight climate change as trees absorb huge amounts of carbon dioxide, but it's been tried before.

A 2014 declaration promised to halve forest loss by 2020; it failed to deliver that goal and deforestation has increased since. Far more countries have signed this new agreement including Brazil, whose far-right leader Bolsonaro has been no friend of the environment. His rule has led to a sharp rise in destruction of the rainforest, reaching a twelve-year high last year. Why is he so keen to sign such a dramatic deforestation pledge?

The main factors are probably the chance to get a share of $19.2 billion riding with the pledge, and the fact that, like other pledges at COP26, it is unenforceable.

But funders have no easy way to tell if deforestation is actually being reduced. Without being able to verify that countries are keeping their pledges, funders are likely to part with less money. Despite all the pledges, deforestation remains profitable to both legal businesses and illegal loggers who operate in the biggest forests. Signing up doesn't actually commit Brazil and other countries to anything.

The next big headline out of COP26 was a ludicrous commitment from India's Narenda Modi, another right-wing leader trying to act green. He proclaimed that India will have net zero emissions - by 2070. That's 20 years after the demand made by the IPCC to ensure global temperatures don't go over 1.5 degrees.

He also pledged to install 500 gigawatts (GW) of renewable energy capacity by 2030, but India already had a target of 175 GW renewable energy production by 2022. It is currently at around 100 GW, putting it behind its existing target. Meanwhile, the International Energy Agency (IEA) says 20% of India's energy currently comes from renewables, disputing India's official figure of 39%. So we can't expect the third biggest emitter of CO2 to get near its targets. The outcomes of COP26 are looking grim at this point.

India wasn't among the 40 countries that signed the summit's coal pledge neither were the other two biggest CO2 contributors China and the United States. This pledge seeks to all but end coal power by 2040. India and China burn two-thirds of the world's coal, so the pledge looks pretty redundant even if those that did sign reach their goals.

The IEA says we should phase out 'unabated' coal plants (plants without carbon-capture or other measures to slash CO2 emissions) by 2030 in advanced economies, with all unabated coal and oil plants gone by 2040. The technology exists, but in the US the only coal plant with carbon capture shut down last year after failing and burning $1 billion in the process (including $190 million of public money).

Methane has been the other headline fossil fuel as the second most harmful greenhouse gas. The Global Methane Pledge is a US-EU initiative and has not been signed by China, Russia or India, who are the three biggest contributors to methane emissions. Russia's emissions rose 32% last year. The pledge itself only asks for a 30% reduction in emissions, so there's a question over if it will lower methane emissions at all!

The IEA has stated that even if all the pledges made are met, we will still reach 1.8 degrees which will have a far bigger impact on life than 1.5 degrees. With the biggest and boldest pledges seemingly done already, COP26 has failed.

The unenforceable pledges and deals made at COP26 rely on finance flowing round the world to spend and invest in a gigantic economic shift. The fact is, capitalism isn't up to the task.

Globally, the wealth and technology exists to seriously fight climate change and to help deal with its effects already underway. But capitalism cannot make the necessary changes because investment is made to maximise profit, in competition with other capitalists, at the expense of all else. Governments internationally, representing the interests of their own capitalist class, are unprepared to make decisions that hit bosses' profits. The global collaboration necessary to save the planet is not possible under capitalism.

Therefore, socialist change internationally is vital. Public ownership and democratic control of the banks and biggest polluters would give the working class itself power to put the planet before profit. Investment could then be planned to develop new technology to improve people's lives and the environment. Only a socialist world can save the planet from climate catastrophe.