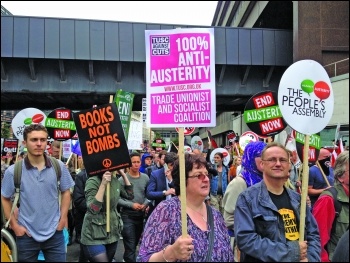 Two-thirds of councils in England which responded to a BBC survey said they were considering a rise in council tax to help fund services. This comes at a time when National Insurance is also set to increase to help pay for the government's 'plan' for health and social care, with the bulk of the money going initially to the NHS.

The Institute for Fiscal Studies has calculated that a 2.8% rise (one of the most likely outcomes) would add, on average, about £40 to household bills from next April. This together with National Insurance increases would hugely impact working-class families, especially those on precarious contracts and low wages.

The Trade Unionist and Socialist Coalition (TUSC), which the Socialist Party is part of, has carried out a survey of Labour councils in England, Scotland and Wales. It shows that they hold £15.32 billion in General Fund reserves, £2.07 billion in Housing Revenue Account reserves, and £2.59 billion useable Capital Receipts reserves, not including the borrowing powers councils can use to add to their spending power.

Why then do they plan to raise taxes on workers? We say: use all the powers at your disposal to defend our communities. Take the fight to the weak, crisis-ridden Johnson government to demand the money!