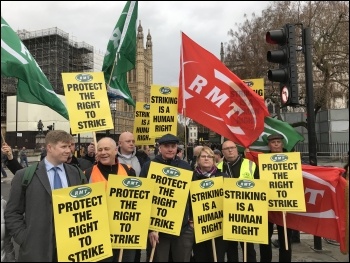 Guards are putting up a robust defence of their grades as CrossCountry management attempts to train up managers to cover guards' duties.

RMT has taken the correct decision to call out our senior conductor and train manager members on 24 and 31 December, and refuse to carry out coaching and shadowing duties in defence of the role of the guard.

Members delivered a massive 82% yes vote for action which clearly demonstrates strength of feeling on the issue. Other train operating companies have trained up other grades in an attempt to build a dependable army of scabs to be used to undermine any future action by RMT members.

With the bosses planning massive cuts to rail workers jobs and conditions, it is no surprise that Cross Country management want to build a strike-breaking workforce - they want to defeat any future attempts by RMT to defend our members using industrial action.

The RMT is to ballot all members at Network Rail and train operating companies in England for strike action over pay, pensions and cuts to jobs. Socialists in the RMT welcome this important decision and will campaign for the biggest turnout and yes vote as possible