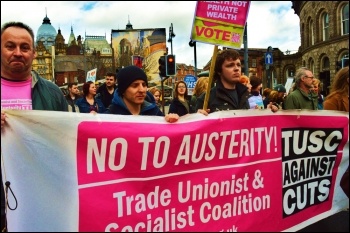 Leeds Labour council is preparing to pass on another round of Tory austerity. The Trade Unionist and Socialist Coalition (TUSC) held its People's Budget meeting to discuss how trade unionists and community campaigners could fight this and other attacks. The meeting included local campaigners, and a rep delegated from their branch of civil service union PCS.

Socialist Party member Tanis Belsham-Wray, chair of the local Unite branch in the 'not for profit' sector, introduced the meeting. TUSC is a coalition, involving transport union RMT, the Socialist Party and others, to give workers the option of standing together on a common anti-austerity and socialist platform in elections.

Cindy Readman, chair of the residents association for Sugar Hill Close and Wordsworth Drive, and a leader of the Save Our Homes LS26 campaign, spoke of their four-year-long fight.

A private developer bought their ex-coal-board properties to evict them to make way for more profitable 'luxury' housing. Cindy's family and six others have received eviction notices. More families are set to receive the same treatment in January.

The council, after lots of pressure from trade unionists and other activists, is trying to organise for a housing association to purchase the estate. However, residents have been told this can only happen if the estate is unoccupied.

Tenants want guarantees they can move back into new properties at affordable rents. The council has £73 million in capital reserves, so residents are arguing that the council should compulsory purchase the properties.

Paul Drinkwater, independent socialist councillor for Killingbeck and Seacroft, also spoke. Paul has been a firefighter and activist in the Fire Brigades Union (FBU) for 25 years.

Paul stood for the council under Jeremy Corbyn's Labour. He was disgusted with many Labour councillors seeking out extra money on top of their basic allowance through 'additional responsibilities'. He left Labour last year, feeling he could do as much, if not more, from outside Labour to represent workers.

When I spoke from the Socialist Party, I pointed to successful campaigns which have forced the council back, including Fearnville Fields and special educational needs (Send) transport for 16 to 18-year olds. Taxi drivers and disability rights groups are trying to stop the taxi rank at Leeds train station being moved.

TUSC has an alternative strategy to stop cuts: using reserves and borrowing powers to balance a no-cuts budget, while building a mass campaign to fight for the funding our city needs from central government.

It's important to link community campaigns and trade unions with elected representatives prepared to be a tribune for their struggles, rather than taking their lead from what big business wants them to do.

Everyone involved should consider standing as an anti-austerity candidate in the council elections in May.

12 Jan Camden & Haringey Socialist Party: Workers fight back - Are unions turning the screw on the bosses?