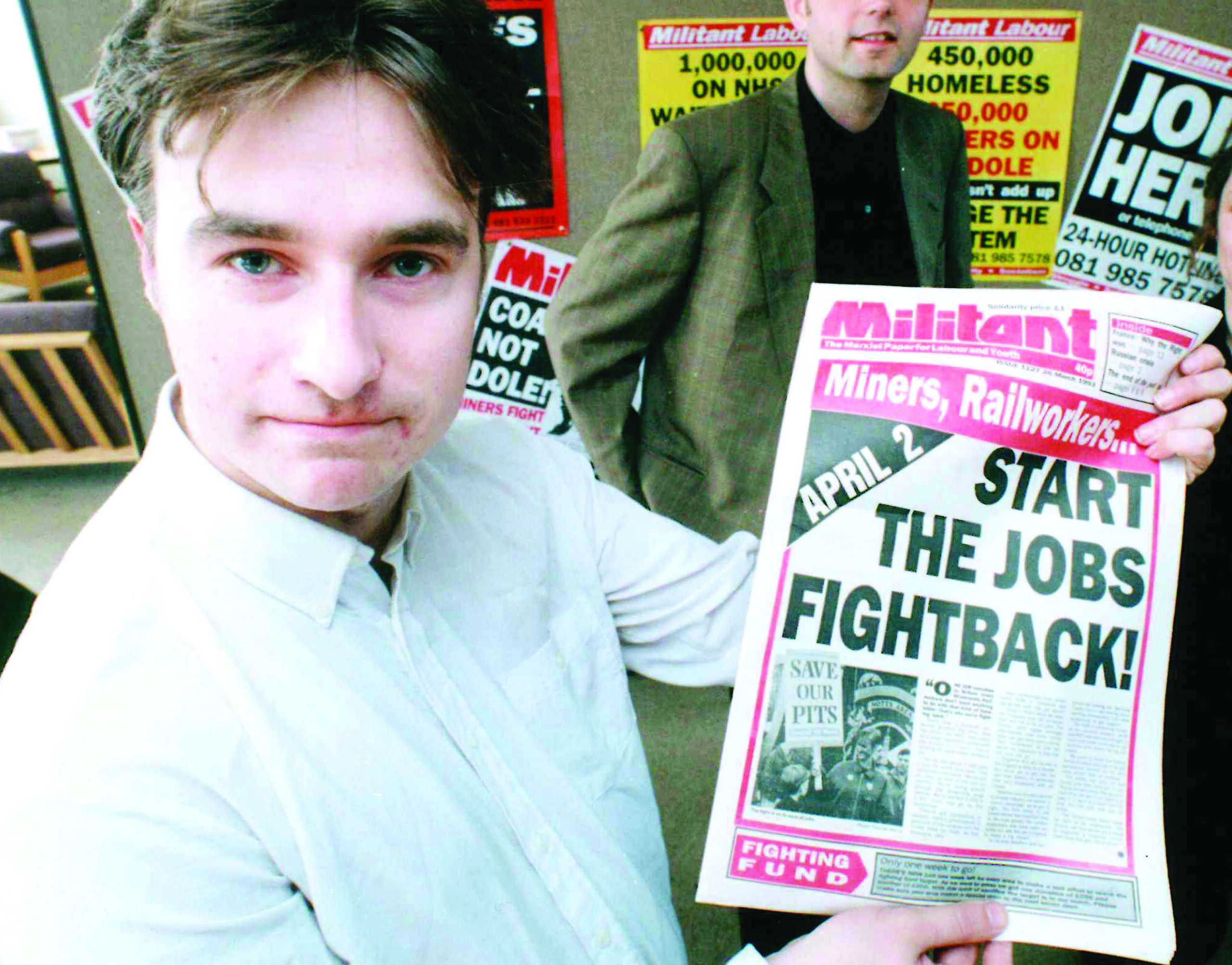 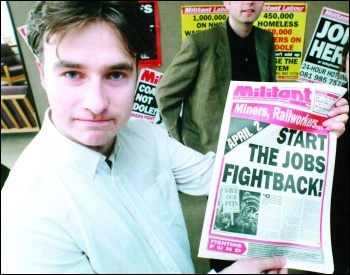 It is ten years since we lost Coventry Socialist Party member Rob Windsor to a serious illness. He was only 47, sadly far too young, but what a force of nature and of socialism he was.

That over 800 people attended his funeral gives just a glimpse of the effect he had on working people’s lives as a tireless fighter and campaigner for socialism and a former councillor in St Michael’s ward for the Socialist Party.

His legacy lives on in those who were inspired by Rob to fight against the capitalist system and for a socialist future.

It was no accident having been fostered as a child that he worked to help the homeless and the most downtrodden abandoned by capitalist society. At 18 he went to London and ran a 900-bed homeless hostel and did soup runs while living in a Notting Hill squat.

When striking print workers in 1986 held mass pickets at Murdoch’s News International plant in Wapping to defend their jobs, Rob went to support them. He said he’d never been so scared as when he saw the real face of the state, as police unleashed horse charges and brutal baton attacks on the crowd. “It was then I realised there was a class war going on and the lengths that the privileged would go to defend their interests”, he said.

In 1987, during the re-election campaign of Militant-supporting Labour MP Dave Nellist, Rob walked into one of our campaign rooms to get involved.

We were keen to have him. Clearly a working-class lad himself, you could tell he was bright and meant business.

As he put it: “Of all the groups on the left, Militant (forerunner of the Socialist Party) was the most serious and disciplined. When something was fully discussed and decided, it got done. Within two years, I was playing a leading role in building the anti-poll tax campaign that beat Thatcher and her tax.”

His quality was also shown in the trade unions. In a battle with right-wing full-time union officials, he won the support in his union branch of Nupe (now Unison) for a half-day, city-wide general strike against cuts in public services.

Rob became a leader of the anti-poll tax campaign. He would help others, often to his own detriment, becoming a hero for the working class and poorest in Coventry.

The anti-poll tax campaign revealed his huge talents, giving confidence to tens of thousands of people to defy the unfair tax with a non-payment tactic. He gave up his job to focus on the campaign.

One day he went away with the hundreds of pages of poll tax legislation. Three days later he returned with a summary of what it was and how to fight it in a mere ten-page campaigning pamphlet, and not a word of it was found wanting.

No one who heard him could forget his wonderful and vivid way of explaining events and ideas. He was one of the best ‘ranters’ we’ve known, whose use of humour always made ideas accessible to people.

He baffled magistrates around the country with his legal nous and drove them to distraction. And he taught others how to do it. Court after court was clogged up. He also bamboozled and chased off poll tax bailiffs across the Midlands with his ‘bailiff-busters’. Within months of beating the poll tax, alongside Dave Nellist and countless other Militant supporters across the country, Rob faced expulsion from the Labour Party.

The early 1990s saw the collapse of Stalinism in Eastern Europe. Capitalism appeared to have triumphed.

The left was now in full retreat. The Labour Party (and their like internationally) was moving to the right. This phenomenon of ‘Blairism’ meant abandoning any talk of socialism and embracing the capitalist market, policies that have brought us to the dire economic position we face today.

Labour’s right wing declared the mass anti-poll tax movement a ‘Militant front’, and Rob’s opposition to the poll tax therefore proved he was a ‘Militant’ and should be expelled.

Our Marxist organisation was under attack, but for all his individual talents Rob, like Dave before him, saw the importance of our organisation ahead of any personal ambition. He fought on to help establish the support and organisation we have today that will advance the struggle for change.

We think Rob was the first ‘Militant Labour’ candidate in England. He stood in the Longford by-election, gaining a marvellous 17% of the vote, which disappointed Rob but showed what was possible if the fight was taken outside the Labour Party.

In 1998, the Socialist Party saw its first council candidate victory as an independent organisation with Dave Nellist in St Michael’s ward. Rob was elected a couple of years later, helping us to win all three seats in the ward.

It is the greatest compliment to say that in his two terms as a Socialist Party councillor (2000-04 and 2006-10) he was utterly politically reliable and down the line.

He was a ‘politician’, not because he wanted to be one, but because he knew we had to fight back. On the council he played a great role in politically hostile conditions. Questioned by the media about his qualifications to be a councillor, he answered “CSE woodwork”!

As councillors, they were able to stop some spending cuts and wage almighty struggles against others. We fought privatisation and PFI in the NHS, helped save green space, won parking rights for local residents, and fought off grasping business and landlord developers

Rob was an expert on housing and ran an inspired campaign against council housing privatisation. Despite the council’s promises of improvements (broken of course) we nearly won a majority in a ballot to oppose the sell-off.

Rob and other socialist councillors used their positions to help inspire others to show what could be possible in terms of building the foundations for a new mass workers’ party on the electoral plane, and would help mobilise support for countless strikes and struggles across the UK and the world!

In 2009, Rob spent days sleeping on a roundabout on the Isle of Wight, joining workers at Vestas trying to keep a wind turbine blade factory in the UK.

When Blair and the Labour Party launched their disastrous illegal war in Iraq, Rob, Dave and Karen forced through a special council meeting to debate the invasion, with only our councillors opposing the war. In 2008, Rob mobilised countless protests on the town hall steps against the brutal Israeli army invasion of Gaza.

He spent huge amounts of time on people’s day-to-day problems and worried about every detail, but he always put at the front the need for fundamental change in society. He did all this as a Marxist who understood the need for a party like ours.

He wrote in the Socialist: “But we are not like this because we are nice individuals or specially gifted. It is because we are members of a party with firm ideas about transforming society so that working people own and control the wealth created; a party that doesn’t allow its representatives to have lavish lifestyles way above those that we represent. We’re there to improve the lives of working people – not our bank balances.”

In 2010, Rob sadly lost his seat as the Labour Party slowly eroded the settled working-class communities of St Michael’s, letting developers and landlords run out of control with Housing in Multiple Occupations.

While clearly disappointed, for Rob “there were bigger battles than a council seat.”

Despite deteriorating health Rob played a huge role in 2010 in assisting young Socialist Party members organising against the tripling of student fees and the removal of Education Maintenance Allowance (grants for college students), speaking and helping to organise numerous protests and a marvellous school students strike that took place in Coventry on ‘Day X’.

We commemorate comrades like Rob to remind us of why we do what we do, and as inspiration to carry on the fight. Remembering or learning about his ideas, his strengths and personal manner, should help us rededicate ourselves to the socialist struggle to change society that he gave his life force to.