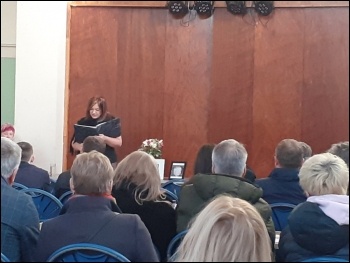 Forty people, including Socialist Party members from Bradford and further afield, attended a meeting on 29 January organised by the family of Pauline Wall to commemorate her life.

Pauline’s warm and friendly personality, as well as her firm socialist convictions, shone through. A contribution on behalf of the Socialist Party from Peter Taaffe and Keith Dickinson was read out, about the political legacy of Pauline and her late husband Pat.

Pat Wall had been the Militant (predecessor of Socialist Party) supporting Labour MP for Bradford North. Pauline’s obituary, carried in the Socialist, was distributed to attendees.

After the formal proceedings, many stories were told about Pauline, including her legendary Sunday dinners around which political discussions would be organised.

At that time, Pauline worked for John Lewis. She had been told that, as a socialist, she was also working for a ‘socialist’ company.

She quickly set those people right, explaining that it was more like the alleged ‘socialist’ Animal Farm: “All animals are equal, but some are more equal than others”. Pauline could be sacked by her bosses, but she couldn’t sack them!

The genuine socialism that Pauline dedicated her life towards is what the Socialist Party is fighting for today. We will build on the tremendous contribution she and Pat made to that struggle.