Some things Socialist Students groups are doing to build support for the 2 March walkout and other protests this term. 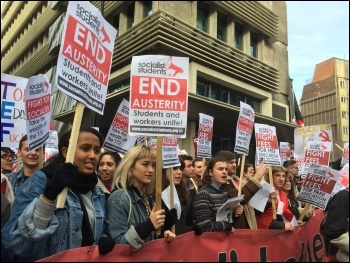 While some students came over to our 19 January campaign stall out of curiosity, stopping for tentative chats before eventually signing up, we also had some who saw us and practically ran over to find out more.

A growing number have seen how cruel capitalism has been during the Covid crisis, and want to be part of fighting for change. Standing in the wind and cold is well worth it when you catch people who are interested.

London – We need to get organised

London Socialist Students organisers are making plans, starting with a meeting on 16 January.

Students are fed up with the marketisation of higher education, and the treatment of students as cash cows. The mood is changing on campus – that we do need to fight back.

But nothing is automatic. It is an important step forward for the NUS to call the 2 March demo, but our job is to organise locally to build support and fight for a wider strategy to defeat fees.

At our meeting, we agreed to write to student unions calling on them to organise and build for a mass meeting on campus with students and university staff. Socialist Students will also help organise local campus protests before the national demo.

UAL Socialist Students has already organised a campaign stall on campus to talk about the day of action, and we met students who wanted to get involved. Other London Socialist Students groups are organising regular campaign activities and meetings too.