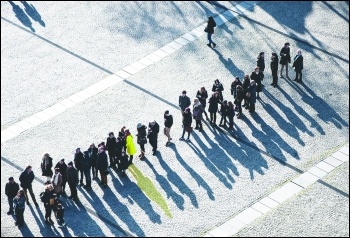 In desperate need of urgent spinal surgery, I am forced to be a patient patient. Due to the long waiting list, I am left bedbound whilst in immense pain.

As I write, broken metalwork is slowly but surely ripping through my back. The creeping horror of knowing that my fate is set, that I will become more paralysed with each passing day, is palpable. Though my case may be unique, sadly it is not singular.

Recently a friend with a painful hernia was advised by a doctor at A&E to “go to the gym, lift something heavy and make it worse”. With the waiting list at my friend’s local hospital so long, the only way prompt treatment could be given was if he hurt himself enough to need emergency surgery.

All those people in pain, powerless, forced to wait. Even the Tories’ plan to deal with the backlog expects waiting lists to rise for another two years.

Capitalist politicians argue that Covid is to blame. But this is not the case.

Despite the immense legitimate pressures that the pandemic has brought, this crisis has been decades in the making, caused by the purposeful failure to fully finance the NHS by successive Tory and Labour governments.

Decades of constant underinvestment have created ideal conditions to push those who are desperate enough to turn to private treatment to skip the queue. If I were able to pay, I could have my surgery at the same hospital, with the same consultant, within the week.

This needless suffering of the population is a choice. It is a choice to debase the beautiful ideals that created the NHS, to betray the working class, and place profit before people.

I am trapped more in this disgusting system, than I am in my bed. I continue to be a not-so-patient patient, hoping that one day people will be considered more important than profit.