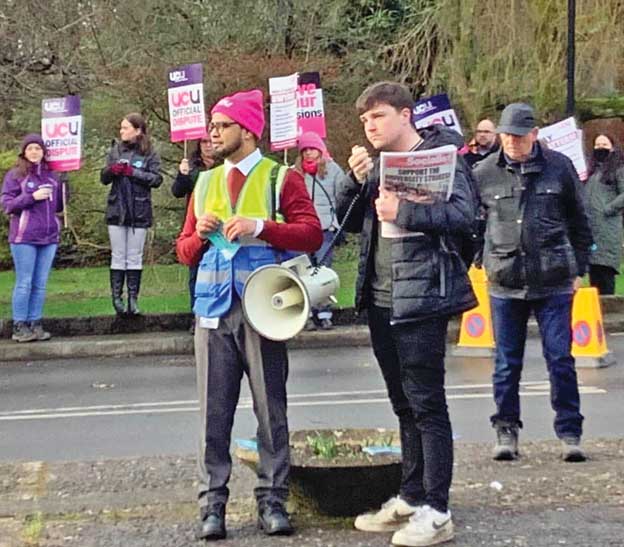 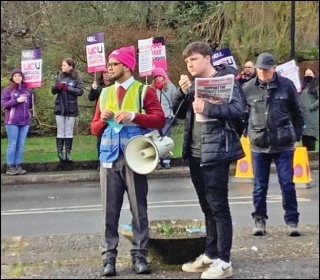 Workers at 44 universities in the University and College Union (UCU) walked out on 14 February after bosses refused to withdraw cuts to the Universities Superannuation Scheme (USS). University management organisation UUK’s proposals, which will see 35% cut from the guaranteed retirement income of members, are set to be formalised on 22 February.

On 22 February strike action over pay and working conditions will also start, with 24 further universities joining the action, bringing the overall total to 68 universities.

This dispute is over a 20% real-terms pay cut over the past 12 years, unmanageable workloads, pay inequality, and the use of exploitative and insecure contracts. Altogether, more than 50,000 staff are striking. Unison members at ten unis are also taking action on pay and pensions.

UCU members were back out on the picket lines at the University of Leeds in their long-running dispute over attacks on their pension scheme.

Despite the inclement weather, a number of first-time picketers took part in this first day of ten days of strike action.

Several of those striking saw the dispute as about more than just their pensions, saying that if university bosses get away with attacking these, other employers could see it as a green light to attack their workers’ pensions too.

The latest round of strikes by lecturers to defend pensions has begun, and Socialist Students were out in Birmingham showing solidarity with them.

Scandalously, the university is now threatening to dock 50% of the pay of lecturers who don’t reschedule lectures cancelled due to the strike.

Victory to the lecturers in their campaign for decent pay, pensions and learning conditions!

The full strike dates, with numbers of institutions involved, are:

Week 2 – (both the pension and the pay & working conditions dispute, 68 institutions): 2 days; Monday 21 and Tuesday 22 February