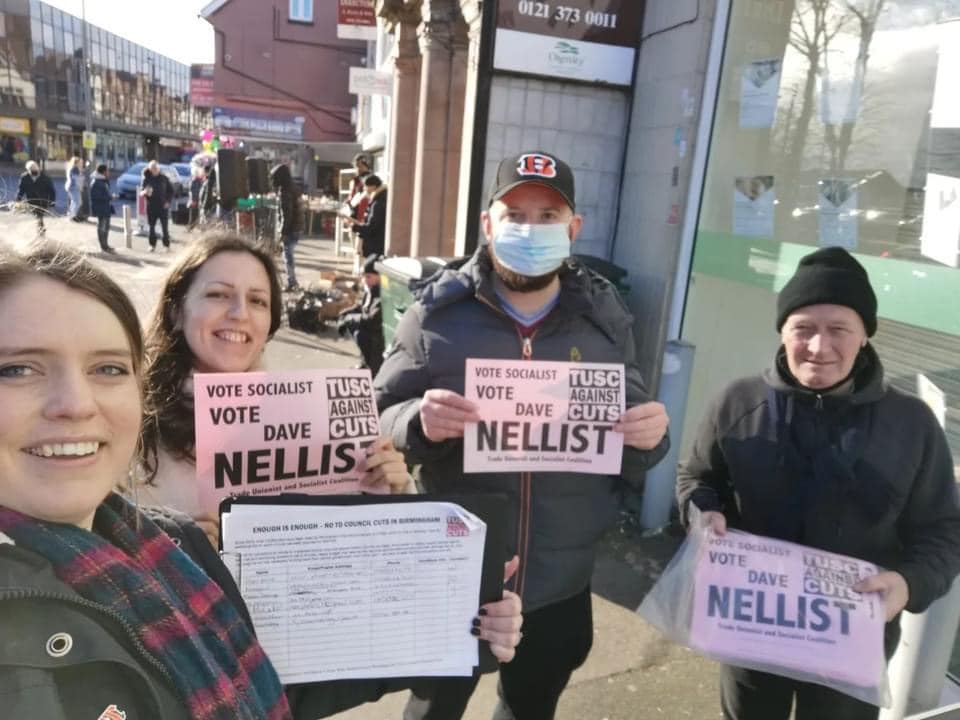 Campaigning in Erdington   (Click to enlarge: opens in new window)

“I’ve already voted for him” said a young mother with a postal vote walking past Erdington railway station. The perfect way to round off a day’s campaigning for Socialist Party member Dave Nellist, Trade Unionist and Socialist Coalition (TUSC) candidate in the Birmingham Erdington by-election.

Many of Dave’s supporters were canvassing for the first time. One commented that he hadn’t been told to get lost anything like as much as he’d expected. There has been next to no hostility to TUSC from voters on the doorstep, which is more than can be said about the main parties. Time and again voters have told us how they don’t trust the main parties. The parties’ already limited support is rapidly evaporating.

We have been trying to persuade non-voters to vote by explaining that TUSC is standing to give them an MP who will stand up for workers in Parliament. Workers are getting fed up with the greed, corruption and sleaze of mainstream politicians.

In contrast, Dave’s commitment to taking a workers’ wage is proving incredibly popular among voters. You can often see their faces light up when this is mentioned.

TUSC canvassers have had a number of good discussions with former Tory voters who can now see that they only act in the interests of the rich.

We have been canvassing every day of the week, as well as doing street stalls and leafleting schools and railway stations, with helpers from as far afield as Liverpool, Leeds and Plymouth. By contrast, Labour seem to have had problems even getting canvassers from Birmingham. A large proportion of their helpers consists of councillors and the odd MP.

Is it any surprise? Labour candidate Paulette Hamilton, as council cabinet member for Health and Social Care, carried out cuts, including the attempted closure of Fairway Day Centre – overturned by campaigners after a high court ruling.

Dave, on the other hand, has been able to mobilise 40 to 50 canvassers on a weekend. He has an impeccable record standing up for workers and voting against cuts as an MP and councillor previously.

Many people on the streets of Erdington agree that workers need a new mass party to fight for our interests. And Dave’s campaign is winning support from the trade union movement further afield. While at this stage Dave is unlikely to win, thousands of Birmingham workers are hearing our socialist message and will have the opportunity to vote for a 100% anti-austerity, workers’ candidate on 3 March.