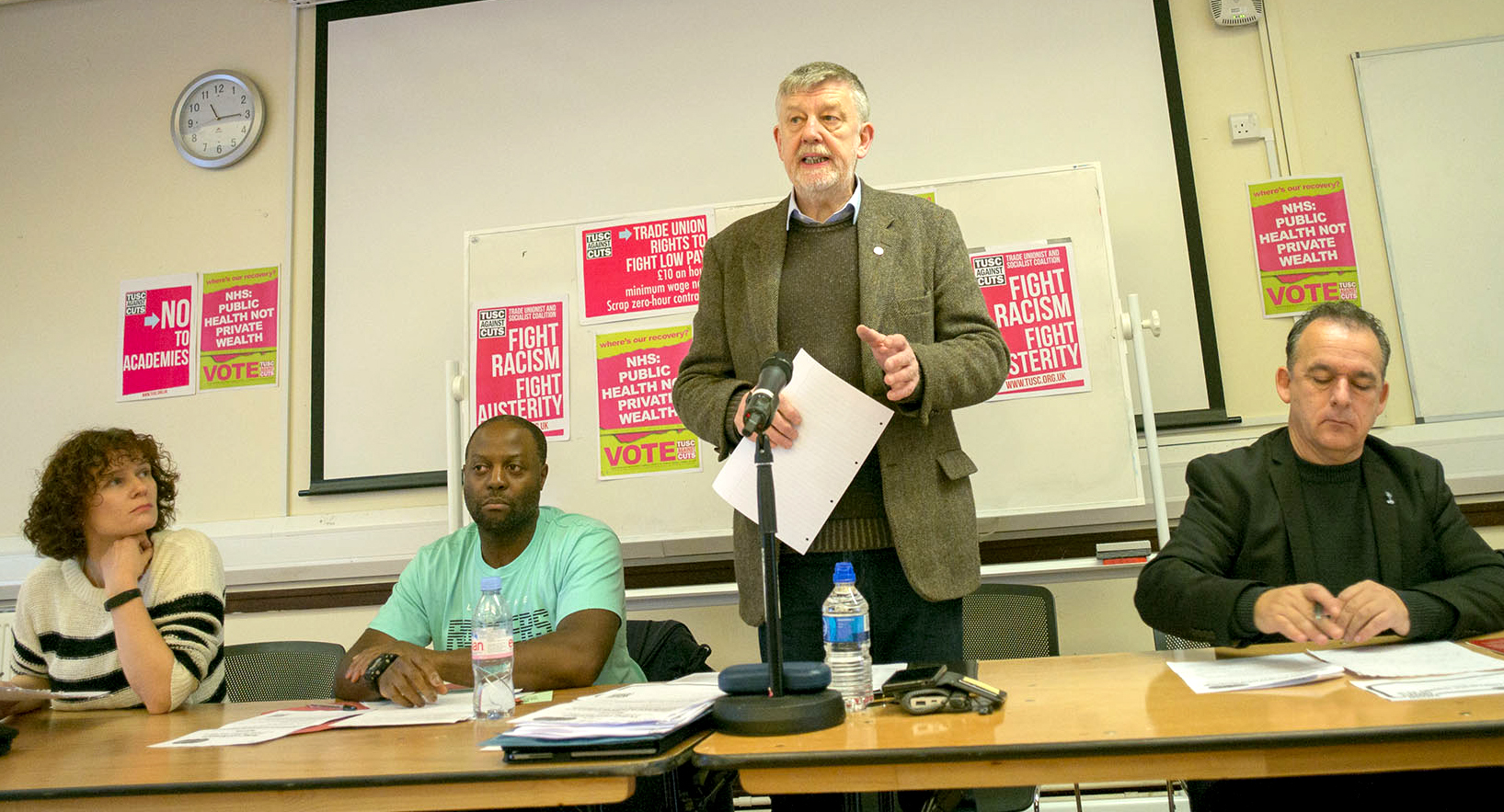 In 2017, nearly 13 million people voted for Jeremy Corbyn’s anti-austerity manifesto, in the highest vote for Labour since 1997. Five years on, Jeremy Corbyn is not allowed to sit as a Labour MP.

Labour leader Keir Starmer has set out to drive every last vestige of Corbynism from the Labour Party, turning it into a totally reliable representative of the interests of British capitalism.

Corbyn’s earlier election manifesto pledges are being dropped in quick succession. Now, Labour HQ is trailing their latest ‘slaughter of the sacred cows of Corbynism’ with an announcement to pledge that they will definitely not nationalise rail, mail, energy or water!

Starmer’s Labour policies on all major issues are increasingly indistinguishable from the Tories. That leaves millions of workers and young people – who were inspired by Corbyn’s “for the many not the few” manifesto and are now facing a massive cost of living squeeze – struggling to find a way forward.

Given the lack of an alternative, many will ‘hold their noses’ and vote for Starmer’s Labour in order to get rid of the Tories. However, an endless future of voting for different brands of pro-capitalist politicians is no future at all.

If all that the workers’ movement offers is unending calls for a Labour vote even when – as with Coventry council at the moment – Labour is carrying out vicious strike-breaking policies, that will have consequences. Inevitably, increasing numbers of workers would not vote at all, or in some cases even express their rage by voting for right-wing ‘populist’ politicians.

So, what is the alternative? Some argue that trade unionists and socialists should fight within the confines of the Labour Party to push it to the left. However, the mass exodus from the Labour Party, now estimated at 200,000 members, shows that more have concluded that, having failed to transform Labour under Corbyn’s leadership, it is not a realistic proposal now, especially when the left cannot even get Corbyn readmitted to the Parliamentary Labour Party.

Instead, what is posed is beginning to build something new, outside the confines of Labour.

Discussions on this are developing across the trade union movement, from the Bakers’ Union’s disaffiliation from Labour; Unite’s announcement that funds would be withheld from all Labour politicians in the Midlands while the Coventry refuse strike continues; and the resolutions submitted to the conference of the rail union, Aslef, calling for disaffiliation from Labour. 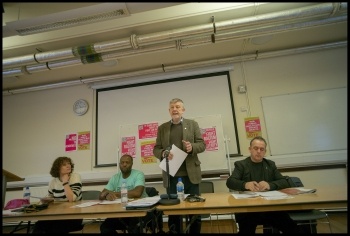 Other voices, however, continue to argue that it is impossible to contest elections outside of Labour, and will only result in marginal candidates getting very small votes.

Yet, to give one example, had Jeremy Corbyn, as the Socialist Party proposed, been prepared to stand outside of Labour for Mayor of London, on a socialist programme, he could have won, as Ken Livingstone did standing as an independent in 2000.

London Underground workers could then have had a mayor who stood with them in a fight against the Tory government, instead of Sadiq Khan, who is standing with the Tories to cut their jobs, conditions, and pensions. It would have also acted to galvanise and enthuse all those who are angry at the direction of Labour under Starmer.

Unfortunately, that opportunity was not taken. Should the trade union movement therefore stand aside and wait to see if Jeremy Corbyn, or another as yet unnamed ‘hero on a white charger’, steps onto the electoral field of battle? Had this approach been taken by those who founded the Labour Party, it would never have come into being.

The pro-Liberal ‘Labour Electoral Association’ pushed for Labour representation within the Liberal Party, and had delegates representing 750,000 trade union members at its 1891 conference. This was not the only trend, however; as late as 1899 one member of the Trades Union Congress (TUC) parliamentary committee stood in a byelection for the Tories!

Experience, however, led increasing numbers of trade unionists to conclude that they could no longer follow behind one or other capitalist party, but had to begin to build their own.

The beginnings were very modest. When, in 1892, one newspaper invited readers to write in if they would be prepared to join an ‘Independent Labour Party,’ they received just 2,000 replies over five months. The following year the ILP, one of the precursors of the Labour Party, was founded. Its first chairperson was the Scottish miners’ leader Keir Hardie.

The polar opposite of his namesake today, he was prepared to fight for political representation for the working class against seemingly overwhelming odds. He first stood in the Mid Lanarkshire parliamentary by-election in 1888, where he had led miners’ strikes. Nonetheless, he only got 617 votes.

The majority of his potential supporters undoubtedly voted for the ‘lesser evil’ of the winning Liberal candidate in order to stop the Tory, who came a close second.

It was not until 1892 that Hardie was elected to parliament, for West Ham South in east London, along with only two other independent working-class MPs.

Then came the creation of the Labour Representation Committee in 1900. A socialist newspaper at the time described the LRC, accurately, as “a little cloud no bigger than a man’s hand, which may grow into a united Labour Party.”

Many others continued to argue trade unions had no choice but to back the Liberals rather than this ‘little cloud’. However, from these small beginnings grew a mass force, which the majority of the working class identified as ‘their party’ for many decades.

Despite pro-capitalist leaders, the working class was able to exert pressure on Labour’s tops via the party’s democratic structures. Under Tony Blair, however, it was transformed into a thoroughly pro-capitalist neoliberal party, with the unions’ power gutted.

When it began by providing, however imperfectly, a political arm for working-class struggles, it enormously strengthened them.

The 1906 Liberal government’s scrapping of the vicious anti-union Taff Vale Judgement, which had effectively made strikes illegal, was driven by feeling the hot breath of the working class on their necks via the 29 Labour MPs that were elected.

Today, as the search for an alternative to Starmer’s pro-capitalist New Labour grows, the Socialist Party is encouraging as many trade unionists as possible to contest May’s elections.

We participate in the Trade Unionist and Socialist Coalition (TUSC) along with the RMT transport union, Resist – founded by the former Labour MP Chris Williamson – and other leading trade unionists, which provides a banner under which any trade unionist or community activist can stand on an anti-austerity programme.

On 3 March, Socialist Party national committee member, Dave Nellist, will be contesting the Erdington parliamentary by-election on behalf of TUSC.

Dave stands in complete contrast to the pro-capitalist corrupt MPs of every establishment party. His candidature has enthused trade unionists up and down the country, not least because of his record of only taking a worker’s wage for nine years as a Labour MP.

Dave fought for the interests of the working class in parliament before being expelled by Labour’s right because of his refusal, in solidarity with millions of working-class households, to pay Thatcher’s hated Poll Tax, and his support for Militant, the forerunner of the Socialist.

Given the enthusiastic response to Dave’s campaign so far, whatever the result on 3 March, like the campaigns of Hardie and others over a century ago, the Erdington byelection will play its part too in the fight to create a mass party of the working class.