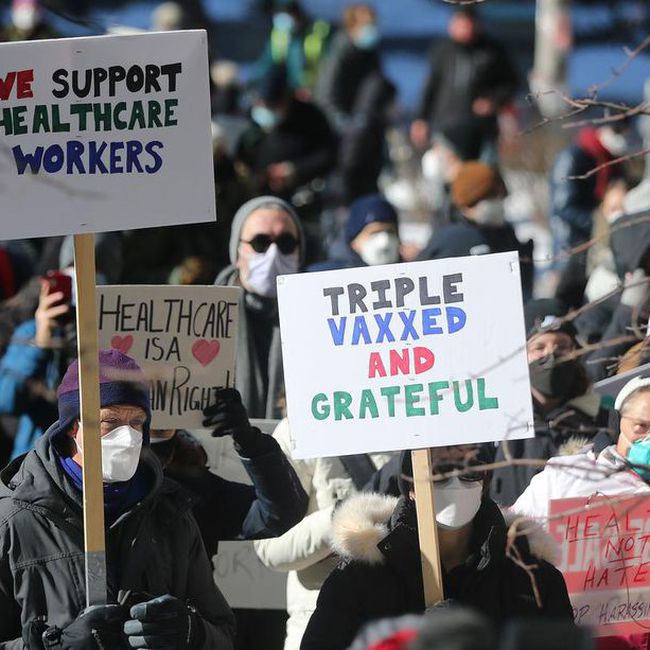 Although police have now cleared the truckers’ occupation from the streets of the capital, Ottawa, the right-wing protest has left both the main establishment Liberal and Conservative parties looking crumpled.

The Canadian Civil Liberties Association had opposed the activation of the Emergencies Act to deal with blockades. The association’s executive director, Noa Mendelsohn Aviv, said: “Emergency legislation should not be normalised. It threatens our democracy and our civil liberties”.

The convoy that made its way across Canada had caused major disruptions in the capital Ottawa and in Toronto.

It also significantly disrupted cross-border trade between Canada and the USA by temporarily closing the key arterial Ambassador Bridge.

What started as a protest against forcing unvaccinated truckers to quarantine for two weeks upon re-entry to Canada spiralled into a general right-wing protest against the government, vaccines, masks, and much more.

While this particular measure only affected about 12,000 truckers (90% of Canada’s 120,000 cross-border truckers are vaccinated), this struggle caught the eye of far-right groups.

Some called this movement a “working-class revolt,” but the leaders, backers, and supporters of the convoy included Donald Trump, Ted Cruz, Elon Musk, and Ben Shapiro.

The crowdfunding platform GoFundMe took down the convoy’s donation page and vowed to return $9 million to donors, citing “violence” and “harassment” by some protesters, but not before releasing $1 million to protest organisers.

The original organiser of the GoFundMe page, Tamara Linch, is the leader of a far-right fringe party in Alberta called the Maverick Party. This party calls for the Prairie Provinces to secede from Canada to form their own conservative nation.

After the donation page was removed from GoFundMe on 4 February, a new one opened up on the right-wing Christian funding platform GiveSendGo.

The majority of working people in Canada did not support the convoy but there is also opposition to the government.

In an Angus Reid Institute poll taken between 11-13 February, 64% percent of respondents said they opposed the protesters’ demand to end all pandemic restrictions, against 33% who said they were supportive.

However, nearly half of Canadians believed the prime minister and provincial premiers were partially to blame for the ongoing protest in Ottawa due to their “condescending attitude toward Canadians who disagree with vaccine mandates and lockdowns” (National Post).

What was once a protest against economic disruptions to some truckers’ incomes galvanised far-right and white supremacist elements.

There had been reports of harassment and violence against passers-by, with one homeless shelter in Ottawa reporting verbal and physical harassment from protesters who came in trying to get meals (despite not being homeless).

Healthcare workers had been particularly affected as trucks blocked ambulance access to hospitals in cities they were driving through.

A counter-protest by healthcare workers outside Toronto General Hospital on 5 February demanded an end to harassment of health workers at hospitals and clinics, and also highlighted the backlog in surgery caused by the pandemic.

It is understandable that some working people may not want to be vaccinated due to a mistrust of exploitative pharmaceutical companies. Measures like Quebec’s proposed tax on unvaccinated people will not make mistrustful people change their minds.

People who are on the fence about getting the vaccine because of capitalism’s profit motive or the history of medical racism in North America have valid concerns; this mistrust is a direct result of the capitalist medical system that puts profits over people’s health.

That being said, the majority of anti-vax protesters in Canada do not fall into this category and are instead members of or believers in far-right conspiracy or white supremacy groups.

Many trade unions, including the Canadian Union of Public Employees, support vaccines to improve workplace safety and reduce workers’ chances of getting Covid.

The union also rightly calls for locals (union branches) to make the final decisions on Covid and vaccination policy in workplaces as opposed to the government and bosses making them.

The solution to the pandemic is a workers’ programme for adequate health and safety, as part of the struggle to change society, for socialism.

The lack of vaccines in the neocolonial world – ‘vaccine apartheid’ – has resulted in new variants; ending patents and intellectual property rights on the vaccines and distributing them globally would help to stop new variants from developing.

Ending intellectual property protections would also allow us to make all the information about the vaccine public and allow for collaborative research and development between health and science workers around the world.

This article has been updated