MPs look after themselves but we have to… 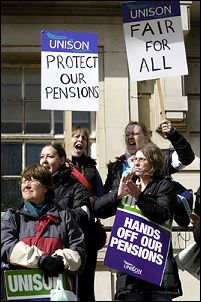 WHAT
HAPPENS when your pension scheme goes into deficit? If you’re a private
pensioner it may mean your employer closes the whole scheme down and
throws you onto an inferior one. This is even if the bosses have caused
the deficit in the first place by having pension "holidays".
Or they may even declare themselves bankrupt so you get nothing at all.

If you’re a public-sector worker you have to make big sacrifices to
go on strike to keep the rights you’ve won over the years and the scheme
you’ve probably paid thousands in to.

But if you’re an MP, you just get the scheme bailed out with
taxpayers’ money. Their scheme’s deficit has risen to £49.5 million but
poverty in retirement is not for them. We’ll have to pay an extra £1.2
million a year to make sure they’re OK after their years of hard work
for the public good.

Lord Turner has just published the last part of his report on
pensions. He’s proposing raising the state pension age for women to 65
by 2020 and to 68 for everybody by 2050. He’s also proposing making a
few improvements to the state pension scheme by restoring its link with
earnings by 2010. He says this will stop the "relentless spread of
means testing".

But already the bosses’ union the CBI are wingeing about the possible
costs of such changes. They want employers to be able to opt out of the
new National Pensions Savings Scheme that Turner proposes.

Under this scheme workers would have to pay in 5% of their wages and
employers 3%. But the bosses are crying out for government subsidies
before they stump up their "share".

It’s clear the bosses can’t be trusted with our pensions. They look
after themselves and their friends in the House of Commons whilst
expecting us to work until we drop.

The next strikes are planned for 25-27 April – a "rolling
programme" of regional strikes – with possible further strikes in
May. The meat inspectors’ strike due for 2-7 April has been called off
whilst talks take place.