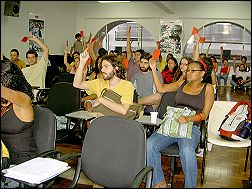 "SOCIALISMO
REVOLUCIONARIO, the Brazilian section of the CWI, made a leap forward
during the last year. The growth in membership and branches, the new
branches, like Rio de Janeiro, the interventions amongst students, in
the trade unions work, and the growth in our paper sales, all reflect
this progress. Our work in P-SOL, and the coming election campaign, will
give us the possibility to make a new leap forward and double our
membership".

This was the message given by Mariana Cristina, who introduced the
discussion on party building at the congress of Socialismo
Revolucionario (CWI in Brazil), on 25-26 March. This optimism and
determination permeated the congress, at which delegates from ten
different cities were present.

There was a lengthy discussion on the political situation in Brazil,
and, in particular, developments in the new socialist party, Party of
Socialism and Liberty (P-SOL).

P-SOL is going to play an important role in the elections later this
year, especially with its well known MP, Heloisa Helena, standing for
president. She is currently polling 5%-8%.

"Brazil is in a transitional period. The PT [Workers’ Party- the
governing party of President Lula] is no longer an alternative for real
change for the working class. Lula’s government has implemented a series
of neo-liberal attacks on workers rights, at the same time that the
banks make their biggest profits ever. An alternative is being
constructed, the P-SOL, but is still only in the beginning," argued
David Torrio in his introduction.

David explained that: "P-SOL is at a crucial stage. There is a
pressure from various currents to limit the party to just an electoral
front."

Andre Ferrari, (a member of P-SOL’s National Executive) also
explained the need to fight against what would be a retreat in the
building of P-SOL.

"We see this kind of retreat in the electoral programme of
Heloisa Helena, compared to the provisional party programme. For
example, she is no longer calling for the foreign debt not to be paid,
but instead calls for a ‘prolongation of the profile of the debt’ – that
would mean paying less interest but for a longer period!"

"[But], regardless of a retreat within the P-SOL party, it is
important to recognise that Heloisa Helena’s election campaign is going
to be seen as a left alternative by workers and youth, in general, and
will get widespread support. Socialismo Revolucionario (SR) will
participate fully in the campaign, and also campaign for our own
candidate for state MP in Sao Paulo – a campaign that will have a more
coherent socialist programme that will be needed to fight the coming
government, who ever wins the election."