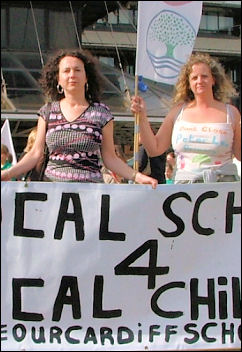 OVER 1,000 parents and school students turned up to lobby Cardiff
Liberal council last week as the council intended to close 22 schools
and threaten 300 teaching jobs across the city. The school students
travelled to the demo in specially hired open buses, accompanied by
brass bands and the like.

The Liberal council was already committed to withdraw (temporarily)
their plans as they couldn’t force the vote through the council chamber.
This followed weeks of pressure by local people particularly on Labour
councillors. But for this fact the lobby would have run into thousands.

At best this plan has gone into cold storage. Not only are 22 schools
under threat but thousands of students would have to travel across the
city, adding to the escalating pollution and fuel bills. 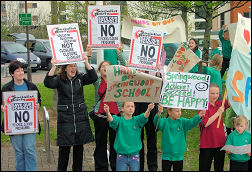 Socialist Party members are calling for a city-wide co-ordination
committee to fight these closures. We must be on our guard. They may
have withdrawn the proposals now but the Liberals will inevitably come
back with new plans. It’s a case of beware the ides of June – they may
try to push these plans through during the school holidays.

TWO HUNDRED angry parents packed Peter Lea Primary school hall on 2
May pledging to save the school from closure. In Fairwater in west
Cardiff two schools, Peter Lea Primary and Cantonian High were on the
list of 22 to close, while Pertrabane Primary was to be halved in size.

These cuts would have had a devastating effect on the whole
community. During the first week back from the Easter break, dozens of
similar meetings took place throughout Cardiff. Parents and school
students, organised in Cardiff’s biggest protest since the anti Poll Tax
struggle in 1990, forced the opposition parties to oppose the Liberals’
plans.

Only the week before, a local Labour councillor came to a Fairwater
Forum public meeting and said he would support the school closures.
Plaid Cymru organised the Forum. Locally they opposed the Liberals’
plan, but they fail to rule out supporting future school closures. 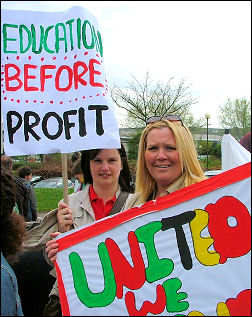 When challenged as to how they would proceed with the campaign to
save local schools, the Plaid spokesperson said they’d meet again in two
months! But Socialist Party members who are parents at the schools put
forward a clear slogan of ‘No Closures’ and the need to link up with
other schools.

The council’s announcement came out of the blue the day before the
Easter holidays, with no prior consultation. Both Peter Lea and
Cantonian High have large playing fields worth tens of millions of
pounds. The council admitted the land would be sold to developers.

Other schools regularly use Peter Lea for sport. In one corner the
school has created an award winning ‘forest classroom’. The council had
no interest in our children’s well-being, they just wanted to grab the
land.

On the Saturday before the Peter Lea meeting, local Socialist Party
members set up a stall to build support. Hundreds signed our petition.
£50 was raised for our fighting fund and 35 copies of the socialist were
sold.

Even though the Liberals have been forced to back down, action
committees have been established at Peter Lea and a meeting is being
built for at Cantonian because we know that this is not the end of the
battle.

The council claims there are surplus places that ‘waste’ £3 million a
year and threaten not to carry out necessary repairs and maintenance to
school buildings. In fact, here is an opportunity to reduce class sizes
and improve facilities for all children across Cardiff.

However this would require a real investment in education with extra
teachers and staff instead of this cuts package.