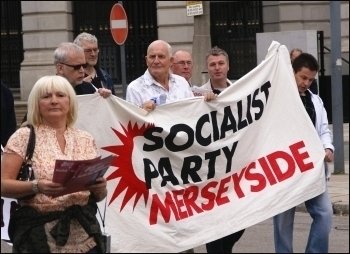 Socialists on the Liverpool Trades Council 'Time to fight back' demo at the TUC conference, photo by Harry Smith   (Click to enlarge)

GORDON BROWN'S speech to the Trades Union Congress was an open declaration of war on working-class people. We were told that, in order to pay for an economic crisis not of our making, we will face unprecedented job cuts, attacks on terms and conditions, pay restraint or possibly freezes, privatisation and destruction of vital services.

£1.3 trillion was spent on bailing out the banks but now big business, backed by all the main political parties, in one of history's most breathtaking con-tricks, have made the "need" for spending cuts to tackle the spending deficit the focus of policy rather than the need to deal with the failure of the unrestrained market.

While Brown said: "Every redundancy is a personal tragedy" his plans to halve the deficit in four years will mean the loss of 300,000 public sector jobs in a £50 billion cuts programme.

Brown will be: "Demanding that internationally we look at setting limits on city bonuses". In other words, nothing so far has been done to curb bankers' excesses. His message to the City fat cats is clear - 'go on, enrich yourselves, you're safe with Labour'.

Profiteers now see the recession as a golden opportunity to privatise large swathes of the public sector on the cheap, while driving down wages and conditions to maximise profits, whatever the cost to the rest of society.

Labour's strategy was summed up when Brown said the deficit would be reduced by: "cutting costs where we can, ensuring efficiency where it's needed, agreeing realistic public sector pay settlements throughout, selling off the unproductive assets we don't need, to pay for the services we do need.

"Labour will cut costs, cut inefficiencies, cut unnecessary programmes and cut lower priorities budgets. But when our plans are published... people will see that Labour will not support cuts in the vital front line services on which people depend".

Brown shamelessly lied when he said that government's attempt to steal the contractual rights of low-paid civil servants to their accrued redundancy terms was actually being directed at highly paid Whitehall "mandarins" in an effort to create jobs. PCS general secretary Mark Serwotka exposed the real motivation, to cut jobs and privatise on the cheap, in an emergency motion carried unanimously by the congress.

All the main political parties are working themselves into a sickening frenzy as they try to out-bid one another as to which can cut the deepest. Liberal leader Nick Clegg called for "savage" cuts - no doubt the Tories will now try to top that.

Cynical politicians claim the public support spending cuts but when the reality of what these cuts hits home there will be widespread anger as communities are stripped of vital services, jobs are slashed and conditions attacked.

The TUC and Labour affiliated union leaderships welcomed the speech, in some cases uncritically. They say we should just keep our heads down so as not to damage Labour's general election chances. But it is Labour's policies that make a Tory victory almost inevitable. Incredibly, the affiliated unions are still handing over tens of millions of pounds to a party that treats their members like dirt.

These assaults will grow in intensity, particularly after the general election, if not challenged - there is now an urgent need to build the widest possible alliance to resist and reverse them. Public sector trade unions must clearly be at the core of any such alliance but all workers, in the private as well as the public sector, service users, and those, including one million youth thrown onto the unemployment scrap heap, have an interest in joining together in response to these attacks.

A fighting, campaigning response to the cuts, which poses the alternative of a society that puts people before profit, can potentially draw millions to its banner.

The orthodoxy established by the press that there is no alternative to cuts can be challenged. This means raising specific demands, like calling for collection of the £100 billion in taxes the rich have "avoided" paying. It also means setting out a clear alternative that includes bringing the banks and public utilities, including the railways, into public ownership, an expansion of council house building and an expansion of public services.

Struggle on the industrial front must be supplemented by that on the political. The need to build effective political representation for working people is now urgent, particularly the need to establish an effective electoral formation that can represent workers' interests as the establishment parties represent those of the rich.

Despite the difficulties our class faces, the empty ideology that 'only the market can deliver' has been irretrievably exposed for the nonsense it always was. There exists a real potential for building a socialist alternative and that is what the left must set about doing.