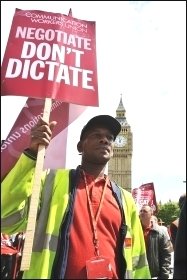 Action by postal workers has continued in many parts of the country, against management's attempts to impose new shifts and working conditions without consultation. These strikes have been going ahead whilst the ballot for national strike action on 'modernisation' proceeds. The ballot closes on 8 October.

'Modernise' seems to be the key word in the current dispute between Royal Mail and its workers. A meaningless word in itself without personal interpretation but one that's top of the list in the manager-speak handbook.

As a postman of 20 years service I surely can speak of the changes that have brought the current situation to a head. The threats and intimidation, and appalling attacks on pay and conditions have left myself and colleagues incensed.

Full year profits are expected to double those of last year to a record £320+ million, with the best quality of service targets met in history, despite the economic downturn.

When compared to its largest European competitors Deutsche Post, whose earnings fell 38%, or TNT's net profit falling a massive 60.5%, the publicly owned Royal Mail's success is something we should all be proud of.

So why has my pay been frozen? Why has my post-round nearly doubled in size? Why is my back aching from carrying up to six or more increasingly heavy (16kg+) sacks of mail later and later for my customers?

The so-called 'modernisation' plan is a retrograde step for pay and conditions and every hard fought national agreement. Health and safety is conveniently ignored to get the job done. Currently the delivery office is a mess of undelivered mail and packets blocking every available inch of space causing health hazards and fire risk.

The computerised Geo-Route plotting of walks and drives was always destined to fail despite the warnings from staff who are now, according to management, complicit in the failure. So the bullying and intimidation has started.

Individuals are being spied upon with video cameras, bullied into working unpaid overtime, suffering sackings and forced ill-health retirements.

This is all to maximise profits, minimise labour costs and destroy a public service because although part-privatisation failed this time due to the credit crisis, it is inevitable according to both New Labour and Conservatives.

I'm appealing to every colleague to wise up and resist the plans currently being implemented by executive action. The £320 million earned off of our hard work is paying dividends for management's record bonuses while we struggle with rising living costs and falling wages.