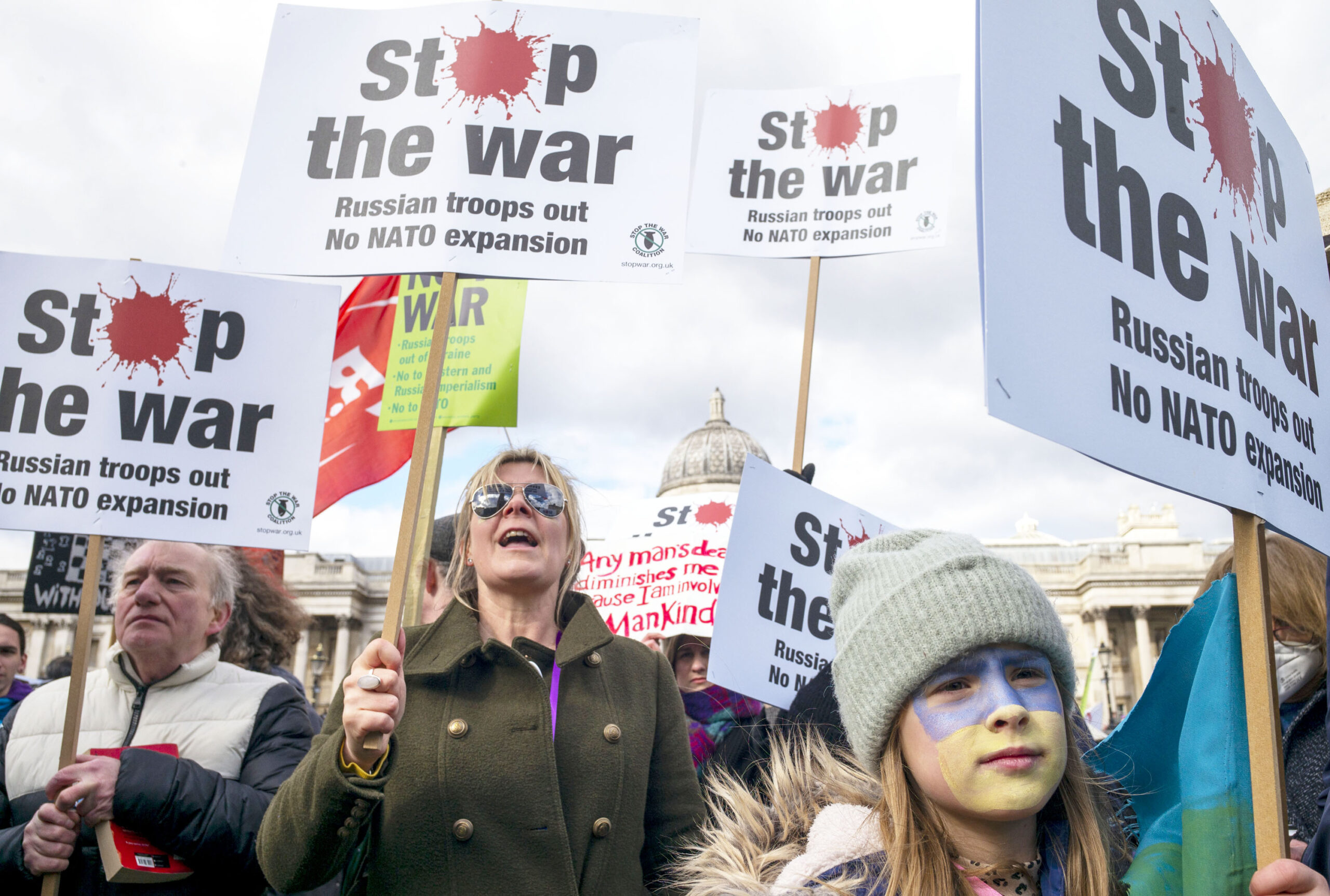 Still following their plan to not intervene militarily against Russia in its war on Ukraine, western capitalist powers have instead turned toward economic sanctions. As a consequence, at the time of writing, the Russian stock market remains closed.

These sanctions, while supposedly aimed at the oligarchs and big-business traders, will still have the biggest impact on the poorest in Russian society. The rich never pick up a bill they don’t have too, and will find any way they can to make the working class pay.

Similarly, outside of Russia, the impact of sanctions on oil and gas prices, given the large amount of reliance on Russian oil and gas internationally, will be passed on to the working class with rising prices. Prices were set to rise dramatically already, and now the likes of Boris Johnson will try to blame the war in Ukraine for the cost-of-living crisis.

Protests have taken place internationally, including in Russia against Putin’s actions. But the working class can go beyond protests. Dockworkers in Cheshire, organised in Unite the union, have refused to unload Russian oil from a German-registered vessel, and dockers in Kent and the Netherlands have turned around shipments of Russian gas.

As opposed to sanctions imposed from the top by capitalist governments, which have the potential to drive sections of the Russian working class towards support for Putin, worker-imposed sanctions can make the appeal to Russian workers to exercise their own strength against Putin and the Russian capitalist class.

As part of workers’ action across Europe, dock workers could send messages of solidarity to the Russian maritime workers. But support must also be sent to the Russian and Ukrainian seafarers, which together make up a whopping 14% of all seafarers internationally, to organise action for themselves.

Worker-imposed sanctions can give confidence to the working class to move into struggle against their own capitalist classes, whether in Britain, Ukraine, Russia or elsewhere.

When workers at Lindsey oil refinery were on strike in 2009 because the company they worked for wanted to undercut wages and super exploit a group of Italian workers, they found ways to reach out to the Italian workers. They translated their messages, painted them on big sheets and held them up near the boats where the Italian workers were forced to stay.

In Ireland, workers refused to touch goods from apartheid South Africa. And South African and Italian workers have previously refused to load arms being sent to Israel. When Pinochet came to power through a bloody coup in the 1970s, dock workers internationally refused to transport Chilean goods or fix Pinochet’s fighter plane engines.

Strip the assets from the oligarchs

Bring them under democratic workers’ control

Michael Gove, the Tories’ levelling up minister – feeling the pressure mounting about the Conservative Party’s receipt of donations from Russian billionaires close to Putin – has made calls to seize the assets of Russian oligarchs. It appears that this threat is about as substantial as the Tories’ pitiful levelling-up plans.

For all the bluster, the Tory government has targeted fewer oligarchs, with less stringent measures, than the US and the EU. Senior civil servants are apparently examining how to make the expropriation of an individual’s assets legal without paying compensation.

Does the government need reminding that they make the laws? Or are they afraid of setting a precedent of taking the assets off the super-rich guilty of warmongering and exploitation? How many MPs and their big-business friends could find themselves on the wrong end of such measures?

As it stands, huge swathes of land and property in Britain are in the hands of anonymous owners who hide behind shell companies registered in tax havens. Legislation in the pipeline, as part of the economic crime bill, gives these shady owners a handy six months to move their money – no doubt a consequence of these characters’ cosy relationship with Johnson’s government of the rich. But it has taken several years to get to this stage, and the legislation itself simply registers who owns what.

The Russian oligarchs should have their assets seized, the wealth and resources could be used to provide housing and services for working-class people, including refugees fleeing the war in Ukraine. Emergency legislation could be passed to make this possible. But Gove, Johnson and the rest could in no way be trusted to use these assets in the interests of the working class. Elected committees of workers, including housing workers and their trade unions, would be much better placed to plan the use of London mansions and assets seized from gangster capitalists in the interests of Ukrainian refugees.

The same is true of the economy as a whole. That’s why we fight for democratic public ownership, so the resources in society can be planned under the democratic control of the working-class majority – not the capitalist minority, or the politicians who represent them.

Out of five thousand Ukrainian refugees who have applied for visas to the United Kingdom, in the first 48 hours after the government’s scheme opened, just 50 were granted. Boris Johnson, while making excuses for the government barely lifting a finger so far, has said: “The UK will be as generous as we can possibly be”. 1.7 million people have fled Ukraine in under two weeks, and we’re meant to believe that Britain, the world’s fifth richest country, accepting minimal numbers of refugees is generosity?

Real generosity comes from ordinary Brits themselves raising £100 million for the DEC Ukraine Humanitarian Appeal and the solidarity of ordinary working people in Poland and neighbouring countries to Ukraine.

Refugees and people escaping war and crisis shouldn’t have to rely on a whip-round of workers already hit by a cost-of-living squeeze, nor should they need certain qualities to be allowed a visa.

A safe and unbureaucratic passage should immediately be created for all refugees fleeing the conflict, and under the democratic control of workers’, trade union and community organisations.

The Covid crisis has already shown that this government can find plenty of money when it wants to. If the Tories insist they need more cash before they can help refugees, they could seize the Russian millionaires’ assets held here. They’re reluctant to do that in case more of us start looking at how much wealth all bosses and oligarchs are hoarding! The trade unions and anti-war movement must demand refugee rights and the money for homes and services for all.

We need to be clear that war is a result of the international capitalist system based on profit, exploitation, oppression and racism.

The people who will benefit from war in Ukraine are the billionaires, bosses and profiteers. We know it is the workers and ordinary people who will suffer: killed and injured by bombs and missiles, and forced to flee their homes. This on top of the problems they face already under the Zelensky government which is backed by rich Ukrainian oligarchs.

Of course, Johnson and the Tories have been happy to take money off the Russian oligarchs to fund their party. Both Tories and Labour governments have welcomed them in with open arms. These are the same governments that backed brutal wars in Iraq, Afghanistan and elsewhere. We can have no trust in pro-big business governments, which are there to defend the interests of the bosses.

Whether it is in Ukraine, the UK, the US or Russia, we need to build workers’ unity and international solidarity in the struggle to kick out the warmongers and profiteers. And that also means building mass movement political parties that can provide a real alternative to these brutal capitalist governments.

We need a socialist alternative that won’t just seize the assets of Russian oligarchs, but take economic ownership and control off the major monopolies, so that society can be democratically run by the working class in the interests of us – the majority – based on planning and cooperation. And not in the pursuit of profit and prestige that causes poverty, exploitation and war.