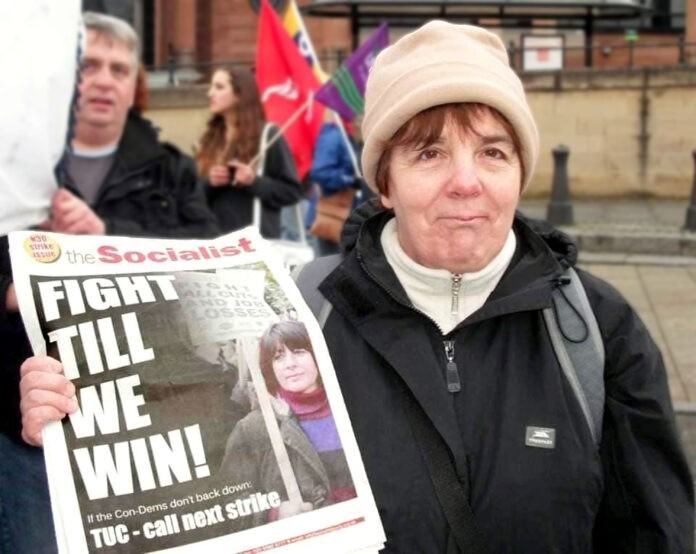 A kind and determined fighter for the working class

It is with great sadness that we announce the death of our Socialist Party comrade Jane James after a long battle with illness.

Jane and I were born in Paddington, but eventually we were rehoused in the ‘New Town’ of Stevenage with our parents. Like so many other families, moving out of London became both a wrench but also the opportunity to live in decent housing.

Both our parents were political and cultured; this was to provide the nucleus for Jane’s future participation in revolutionary politics. Our mother would remark in later years that she was proud to have brought all her children up as socialists. Our parents were active in the Labour Party. Our father was also a trade unionist and our mother became involved in children’s adventure playgrounds.

This inspired Jane to join the Labour Party Young Socialists (LYPS), where she met supporters of Militant (forerunner of the Socialist Party), including Steve Glennon and Sue Cummins. Jane was immediately drawn to the ideas and methods of Marxism, and joined Militant shortly after attending her first LPYS conference in 1973.

While still at school, Jane quickly became active in Militant, and also became branch secretary of the LPYS. Clare Doyle, national treasurer of Militant at the time, fondly remembers meeting up to discuss finance when Jane was still in school uniform!

Jane left school with a raft of qualifications, and her first job was working at the local land registry office. There she joined the CPSA and became active in the union. Jane eventually left that job after a short period and started work at British Aerospace, the largest employer in Stevenage. Jane joined the APEX union and became a senior union shop steward.

It was here that Jane honed her organisational and leadership skills. Taking on her employer, she was in the forefront of many battles, leading to industrial action in some instances. These skills that Jane acquired would turn out to be of great benefit to our party when confronting the Labour Party and trade union bureaucracies throughout her later work as a full-time organiser for our party.

Jane was also a tireless advocate for Militant at her workplace, selling our paper to her fellow trade unionists and pushing our ideas within her union.

When Jane and her then partner Glyn had their first child, Clare, in 1981, Jane left her employment but stayed active within Militant. Their second child, Sarah, was born in 1983.

Jane eventually became regional treasurer for our party in the Eastern region. The job of treasurer in a revolutionary party is of upmost importance, but not the kind of role that suits everyone. However, Jane’s enthusiasm and commitment for the job has had a long-lasting impact on many comrades who have taken up the same role. They have taken inspiration from Jane’s contribution and meticulous approach to maintaining the finances of our party at regional and national level.

Our orientation towards reaching out to workers previously meant working in the Labour Party. Jane was active at branch and constituency level, but was also involved in the women’s section. The expulsion of the five members of the Militant Editorial Board from the Labour Party in 1983 was a turning point for our work. Shortly after, the right wing of the Labour Party in Stevenage started the process of expelling our comrades.

Jane, along with nine other comrades, was targeted by the right wing after attending a fundraising event to raise Fighting Fund for the Militant. The courageous battle by all ten comrades to resist the expulsions started in 1985. Their actions to fight the right wing of the Labour Party included challenging the decision in court.

During this period, Jane became the partner of fellow Militant full-time organiser, Jim Horton. Jane’s next battle was against the Poll Tax. Her role as a regional full-time organiser, along with Jim, meant travelling the length and breadth of the Eastern region to attend various court cases and to stop bailiff actions against Poll Tax non-payers.

Jane carried on as a regional full-time organiser, but in challenging circumstances, particularly after the collapse of the Soviet Union in 1991, which impacted the work of our party. Jim lost his first partner and fellow comrade Kim; his two children, Jade and Fern, then became part of Jane and Jim’s family, together with Clare and Sarah.

After the turn away from the Labour Party, we stood in the 1997 general election. Once again, Jane and Jim were instrumental in pursuing the ideas of Marxism in a very difficult campaign.

In the late 1990s Jane started work at the Socialist Party’s national office in London, where she became national treasurer and a member of the executive committee.

Not long after this, Jane and Jim moved to Tottenham with their family to be nearer the national office. Jane’s skills in dealing with finance at a regional level were greatly appreciated by comrades working alongside her at the national office. She was held in high esteem by all the various regional treasurers and full-time organisers she collaborated with in her national role.

From 2007, Jane worked in the industrial department at the national office alongside Bill Mullins and, later, Rob Williams. Jane was immediately involved in the campaign to defend four Socialist Party members who were victimised by the undemocratic leadership of Unison.

All these comrades had outstanding records of fighting for their members. Jane helped organise the ‘Defend the 4’ campaign to force the Unison leadership to drop the charges. Her capacity to deal with the bureaucracies of the trade union movement greatly enhanced the campaign.

Jane was also engaged in the struggle to defend the 600 jobs lost at Visteon in 2009. Along with other comrades, she supported the workers’ occupation that developed at the Visteon plant in Enfield.

Jane’s final years became a battle with dementia that so cruelly robbed Jim, her family and comrades of experiencing her exceptional talents and understanding. Jane, with the help of Jim, fought valiantly to mitigate the assorted symptoms that are associated with this disease.

When recollecting a person’s life, we choose to recognise the kindness that we have experienced from them. Looking back over Jane’s life, it would take a gargantuan struggle by anyone to reveal anything that resembled the opposite of that description.

Jane was a wonderful mother to Clare, Sarah, Jade and Fern. She will be sorely missed by Jim, her family, and all the comrades who knew her.

Above all, Jane will be remembered for her determination, enthusiasm, and unassuming character. She never forgot her working-class roots and the absolute necessity to rid the world of war, poverty and discrimination. Jane understood in her early life that the only way to achieve this was to fight for a democratically run socialist society, and devoted most of her life to this end. Her efforts will not have been in vain.