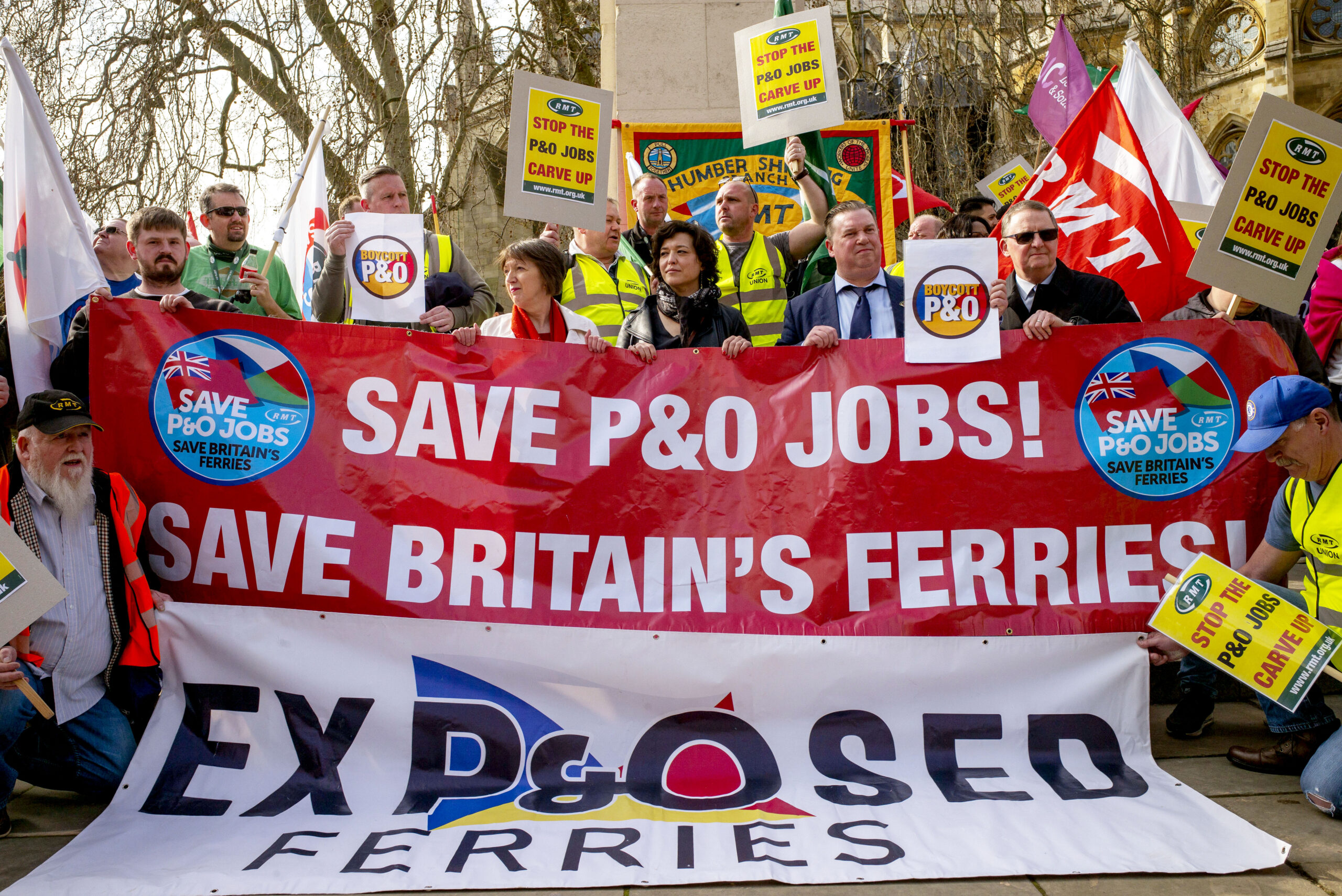 Workers’ mobilisation needed to save jobs

The chant “Seize the ships!” has rung out again in the last few days on protests in Hull, Dover, Larne, Liverpool, Cairnryan and Glasgow, organised by the RMT and Nautilus International unions in support of the sacked P&O workers.

The protests were the biggest yet, as workers and supporting members of other unions reacted with fury at the brazen words of P&O CEO Peter Hebblethwaite, who admitted that the company broke the law because “no union could accept our proposals”. As when notorious convicted wealthy tax evader Leona Helmsley was once heard saying: “Only the little people pay taxes”, workers will now draw the conclusion that laws only apply to us, not the bosses and the rich!

Hebblethwaite’s comments were even too blunt for Boris Johnson and transport minister Grant Shapps, who have called on him to resign. However, it won’t be lost on ordinary people that the Covid rules were flouted by many in Johnson’s clique.

But it will be no consolation for the sacked workers to replace one brutal boss with another. All P&O ferries and ships should be immediately impounded and the workers reinstated to their jobs on their agreed pay, terms and conditions.

The pressure is building on the Tories as the outrage increases. Moreover, the government’s Maritime and Coastguard Agency has now had to impound two P&O ships because of concerns about their safety, given the brand-new crews and safety equipment and procedures. This shows the crucial role that the unions play in upholding safety.

When dismissing the workers, P&O management tried to justify their vicious actions by arguing that the company couldn’t survive by paying workers their contracted pay. They then employed, or rather super-exploited, workers on less than £2 an hour, a fifth of the minimum wage – a practice shamefully common place in the industry.

In an unprecedented step, Shapps has now written to senior P&O management demanding that the workers are reinstated on their current terms. His letter implies that if P&O don’t step back, new crews will have to be paid at least the national minimum wage. But this outcome would still be unacceptable, as new workers would be on less than the sacked workers.

If P&O or its parent company DP World claim that they can’t make a go of the business on the basis of paying workers their previously existing wage, the books of both companies should be opened and inspected by the workers and their unions.

To defend the jobs on their agreed contracts, and the communities in which the workers live and work, P&O should be nationalised and taken into public ownership under democratic workers’ management and control. The same goes for other ferry operators super-exploiting workers.

Trades Union Congress (TUC) general secretary Frances O’Grady posted an article in the Financial Times, ‘P&O abuses expose the UK’s embrace of cowboy capitalism’. In it, she correctly details the litany of company abuses of which P&O’s is just the latest.

But the search for the ‘good employer’ is increasingly in vain. Covid has merely brought centre stage the brutal character of capitalism, which is becoming the ‘new normal’. Unite the Union has alone estimated that 10% of its members have been affected by ‘fire and rehire’. P&O has given an even more vicious twist to this practise. How many companies will now look to see if they too can emulate P&O if they get away with it?

But the response of too many of the union leaders in the depth of the pandemic was to capitulate to an illusory national unity with the bosses and the Tory government. In September 2020, O’Grady stood with Chancellor Rishi Sunak and the head of the employer federation CBI when the Tories were going to water down furlough, a step that they had to retreat from given the threat to the economy and the likely backlash from workers.

However, workers have fought, in a growing strike wave, both against the fire-and-rehire offensive and to demand above-inflation pay rises to keep their heads above water. It’s workers’ action that has challenged P&O, with Dutch dockers refusing to load ships, but more is needed now as the fight is at a crucial point.

The best way to support the sacked workers and their unions would be for the TUC to call a national demonstration at one or all of the ports in the next week, to mobilise thousands to blockade the ports. This would send a mighty message to P&O, DP World and the Tories behind them that the fight is still on and the sackings must be stopped.

News that DP World, owners of P&O Ferries, are set to pocket £50 million in government funding has added to the enormous anger of sacked seafarers and RMT members. Under the Tories’ flagship levelling-up scheme, Freeports have been reintroduced, avowedly to create jobs.

DP World runs Thames Gateway and Southampton docks, the second and third largest ports in the country. The government says funding is for infrastructure investment but, in reality, it is a subsidy to big business. DP World is a UAE state-owned company with a turnover of £8.2 billion in 2020. Hardly short of a few quid for investment!

Now, linked to the mass sackings at P&O, this hugely undermines any credibility in the Freeports initiative. Under the enormous pressure of events, DP World’s UK commercial director has been forced to resign from Solent Freeport’s board. Further evidence the Tories are desperately trying to salvage their discredited project.

At the time of its announcement, the RMT and Unite unions were quick to oppose the scheme as ‘sinkholes’, warning deregulation would lead to attacks on jobs and conditions in the drive to profits. DP World’s action at P&O has demonstrated just that.

P&O’s mass sackings show workers can have no confidence in capitalism to ensure secure jobs and decent wages. As P&O seafarers have chanted: “Seize the ships!” This is the only way to protect jobs and services, the trade unions must come out firmly and oppose the Freeport scheme, and instead call for the renationalistaion of the docks and the restoration of secure employment with decent pay and conditions for all.

Sacked P&O crew, together with rail members of the RMT union, joined Hull and District Trades Council activists for a rally and protest at King George dock in Hull.

After a short rally, we marched to the main access roundabout and held up the traffic, effectively stopping lorry drivers and car passengers who had booked onto the P&O ferry. Recognising that a successful protest would cause inconvenience, the Trades Council produced flyers to explain why the protest was taking place.

Throughout the entire day, no more than three cars were hostile to the protest. Typically, the ‘would-be-P&O passengers’ were actually supportive of the protest. Many said that it was only because they had pre-booked that they were intending to go, and they would never use P&O again.

When the police tried to stop the roundabout protest, the march headed into town, blocking the main road. This unplanned march added to the delays and highlighted the protest.

Protesters were further encouraged by the news that the ‘Pride of Hull’, which had sneaked out of Hull earlier in the week and sailed to Rotterdam, had returned with its cargo unloaded. Dutch dockers had refused to unload in solidarity.

Moving forward, the Trades Council is leafleting the docks to try and ensure that Hull dockers boycott P&O goods. We will continue to work with the RMT to ensure a victory.

The demo in Dover on Saturday in support of the sacked P&O workers was loud, energetic and full of anger. Anger at the P&O chief who openly admitted in the Commons that he broke the law sacking 800 workers and astonishingly said he would do it again.

500 people took part in the march from Maritime House to the Dover ports. There is huge public support for these workers; many joined as the demo progressed, or cheered. Car and lorry drivers tooted, and those in their homes came out with pots and pans to cheer us on. The demo started and ended with a rally. Eric Segal, a member of the Socialist Party, spoke and brought solidarity from the South East Kent Trade Union Council.

Hundreds met at Crosby Seafarers centre to march in defence of the 800 sacked P&O workers.

There was a good activist turnout and contingents from many unions: PCS, Unite, Unison and GMB. There was a huge turnout from RMT members; the Belfast branch crossed the Irish sea to attend, and the black and ethnic minorities conference, which was meeting in the city on the same day, sent a delegation.