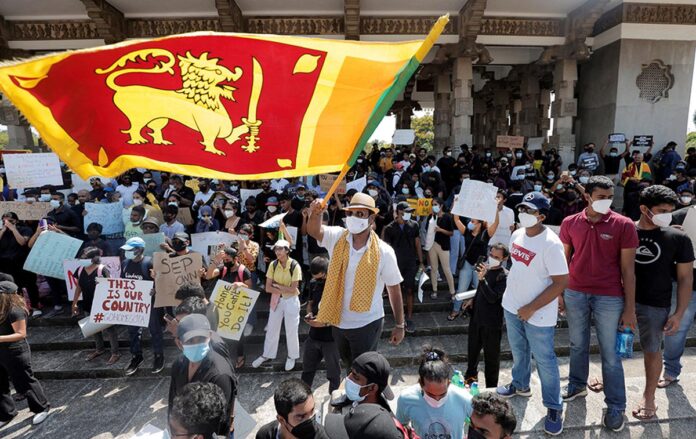 Poor people should not be made to pay

Protesters across Sri Lanka are defying a government curfew and arrests and continuing to demonstrate against the crippling economic crisis afflicting everyone apart from the super-rich.

Essential items such as food, medicine, fuel and gas are in short supply while the prices for these goods are skyrocketing. Electricity blackouts mean that fridges and air conditioners can’t operate. Lengthy queues for food and fuel has even led to people dying in the heat.

The government of the much-hated president, Gotabaya Rajapaksa, has implemented a state of emergency, banned social media and put military personnel on the street.

He also attempted to defuse public anger by offering up a sacrifice of virtually all of his cabinet ministers resigning, including several family members, while promising ‘reform’. But many have had enough and repressive measures and cabinet reshuffles cannot contain the eruption of anger that is taking place.

A number of opposition parties, including former allies of Gotabaya, were claiming that the government no longer has majority support in parliament. And 40 MPs belonging to the president’s governing coalition have now resigned. There were reports that there could be a ‘no-confidence motion’ leading to an election.

The main opposition parties in Sri Lanka hope to do well in an election against the unpopular Rajapaksa family.

But the government is claiming to be holding so-called ‘all-party’ meetings and working towards a compromise ‘deal’. Any so-called ‘interim arrangement’, drawing in some of the opposition parties, and even protest leaders, into the government, will not solve the current crisis.

The main demand of the countrywide protest against Gotabaya and his government is not just replacing them with opposition leaders, but to end the hardship that is faced by millions now.

Neither the government nor the opposition has any viable solution to end the crisis. The government is attempting to buy time by shuffling around the cabinet. This will not be enough to satisfy the protesters. More decisive battles are yet to come.

The ‘kicking-the-can-down-the-road’ policy of the government is unlikely to last long as it simply cannot borrow enough to pay all its debt.

The government may have to borrow almost the equivalent of its total debt in order to import essential food and fuel, and start paying what it promised to pay this year.

No lender is willing to go that far as many are predicting ‘inevitable default’. But the government repeatedly denies that it faces default and continues to maintain that it will pay all its debt, using what’s left in the depleted foreign reserves.

Even sections of the capitalist class are amazed as to why the government is hell-bent on paying the debt. “Why would they want to, I’m a bit flabbergasted. They are bankrupt, pretty much,” asked Richard House, head of emerging market debt at Allianz Global Investors. He added: “They are wasting precious reserves. It’s just delaying the inevitable” (Financial Times).

Given the government’s refusal to default, it is likely that some sort of ‘restructuring’ or some form of ‘debt swap’ is possible. This will be at the cost of dismantling state services, a reduction of wages, handing out parts of the country to the international and local vulture capitalists, increasing poverty, and harsh conditions for millions for generations to come.

Poor people and workers will be asked to pay for the crisis that they did not cause. The president, while claiming that he did not create the crisis, is making every effort to punish the poor for it.

The capitalist profit motive and the policies of the capitalist state in general, are the fundamental reason for the crisis. No capitalist opposition parties in Sri Lanka blame capitalism, but instead reduce everything to ‘mismanagement’.

All the right-wing opposition parties claim that the main reasons for the crisis are the ‘unsustainable’ debt policies and the tax cut that was made by the government in 2019.

Reducing Value Added Tax (VAT) from 15% to 8% is repeatedly cited as the main failure by right-wing economists and the opposition, who make no reference however to much lower corporate tax (which has gone down to 18%, and in some cases even below 14%, from around 36% in 2009).

It is false to assume that the crisis could not have developed if the pre-2019 tax system had been maintained. This argument, however, is linked to renewed pressure from the International Monetary Fund (IMF) and the capitalists to increase income tax and VAT, along with maintaining high prices for fuel and other key commodities.

This means the government may be pushed into implementing these measures, as well as dismantling public services, under the guise of ‘reducing state expenditure’.

The latest report of the IMF admits that it “encouraged the authorities to reform state-owned enterprises and adopt cost-recovery energy pricing”.

It is not clear how far the IMF will now go to bail out the economy. It could fall out with other key lenders.

The capitalist class, in fear of its losses, is trying to frighten people by saying default would be a disaster. But with or without default, the continuation of capitalism will be a disaster for the masses!

But economic default will not be a ‘huge disaster’ if the burden is not transferred to the wider population. Armageddon will not descend on Sri Lanka on the day after the default. But the fear created by the government and capitalists about the default is linked to preparing the masses to bear the brunt of the losses. This should be resisted.

However, without socialist measures the crisis will be long and deep. Full capital controls must be implemented immediately, along with price controls of essential commodities. The ‘commanding heights’ of the economy must be brought under workers’ democratic control, to plan for and produce the immediate needs of society. It should be paralleled with decisive investment in improving local manufacturing and farming.

Workers’ committees should be formed in workplaces to oversee production and distribution democratically, and to improve productivity. This should be linked to improving wages and working conditions.

Of course, none of these measures will be implemented by the Gotabaya government or any capitalist government. Hence taking such decisive action is linked to reorganising society.

Unless the workers who produce all the commodities democratically control state affairs, such a plan cannot be implemented. We cannot get there by parliamentary means alone. Workers, farmers, and students should start forming their own committees and, in the local communities, to mobilise mass opposition.

As a first step, a national assembly can be organised to bring together rank-and-file trade union activists and socialist organisations, and other activists, to prepare for further struggle. Democratically organised assemblies can begin to take measures to refuse to pay debt, and organise production and distribution. This will create an alternative power base that can challenge all the capitalist institutions.

The trade unions can bring together their members to form a national body that can organise strike action, including a general strike, along with other mass protests. and open the way to the implementation of an alternative programme.

Unfortunately, trade unions that are linked to the political parties have so far refused to take any decisive action. In this political vacuum, the Samagi Jana Balawegaya (SJB, United People’s Power) has begun to be seen as the main platform for struggle.

However the SJB campaign mirrors that of the notorious right-wing UNP leader J R Jayawardena in the mid-1970s. He used the mood against the then government to mobilise support by scaremongering about the ‘red danger’, together with anti-Tamil rhetoric.

Significant forces within the main left party at that time, the Lanka Sama Samaja Party (LSSP), were, to an extent, able to counter some of this chauvinist propaganda. No such party exists today.

The main opposition’s call for a general election to be held now is wishful thinking. The Rajapaksa family will not give up power voluntarily. Instead, they will use further repressive measures and Sinhala nationalist and racist propaganda to keep themselves in power.

The Rajapaksa family still maintains its base among Sinhala-Buddhist nationalists. It’s only the development of an organised mass movement that can bring down this government.

The inability of union leaders to lead the struggle, and the fragmentation of the left, leaves an enormous vacuum. This, and increased repression, means the task of getting rid of ‘Gota’ and establishing a workers-led government can seem an impossible task. But recent events have proven otherwise. Mass actions, at times spontaneous, emerging across the country are showing the way forward.

But mass action alone will not be enough. It needs to take an organisational form. Unity can be forged with the far-sighted programme and perspective that guides concrete steps. Democratically organised committees across the country can come forward in a national body to deal with the emergency situation that exists and go forward to establish a government representing working people.

This should also be linked with an appeal made to the working class in south Asia to take the same road by building movements that can form workers-led governments and be the basis for going forward to the establishment of a voluntary socialist confederation of South Asia.