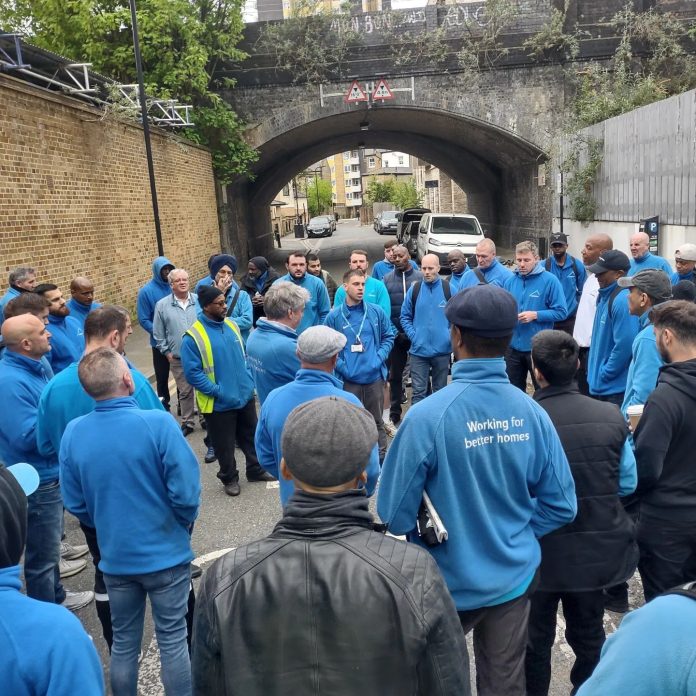 Council workers in three vital departments in Hackney, east London, are striking back against inflation. Fantastic displays of working-class solidarity are putting the borough’s ‘Labour’ local authority to shame.

A striking bin worker said to us: “We do the dirty work. We keep the borough clean. We took our lives in our hands during Covid. How are we meant to afford to live now?”

Labour’s austerity in Hackney has been going on for over a decade with £140 million of cuts. Inflation has hit 8.5%.

A housing maintenance worker told his picket line: “There’s managers here on hundreds of quid a day. They’re not on the frontline. They’re working from home.

“But for years we’ve been getting pay rises that have been nullified by other things. Inflation’s at nearly 9%. Do the maths!”

As they are all key frontline services they will have an immediate impact. Strike days in the run-up to the local elections, including polling day itself, will cause an added degree of embarrassment to the council.

The 100-strong housing maintenance picket lines show a solid strike and boisterous mood. Over at the SEND drivers’ and escorts’ depot, service seems around a quarter of normal capacity, if that.

At the refuse and street cleaning depot, the dispute is already bitter. Some of the current managers are former union reps. Now they’re undermining the unions.

This includes intimidating up to 150 agency workers – some without permanent jobs for years, some freshly interviewed. They all fear they won’t get sent shifts if they join the action.

Supporters of the bin workers blockaded the gates to stop trucks going out on the first strike day on 25 April. Management called the police, who turned out in force. But pickets report that managers blocked the road outside to disrupt buses in order to get the Met down!

Housing maintenance reps reported the bin management’s bullying to their own picket line. “They’re being abused. It was shocking. They need our help.”

Housing maintenance workers immediately shouted to their reps that they should all go down to the bins the next morning. Sure enough, around 40 turned out at 5am to support the bins.

However, management had moved most of the wagons out following the previous morning’s stand-off. So dozens of supporters of the striking workers marched across Hackney Marshes to where the bin wagons were, and blocked them leaving for some time again!

Over 100 workers have attended each of the rallies before and during the strikes on the town hall’s steps. They were buoyed up with solidarity support from other Unite branches, and other council unions, including Unison and the National Education Union, and the Socialist Party.

In a powerful speech, Unite’s lead national officer for local government, Onay Kasab laid responsibility for the dispute at the feet of Hackney Council. He pointed out Labour councillors can earn more in allowances than the workforce gets in wages – and still have outside jobs as well.

Onay reminded the council it has around £300 million of usable reserves. They say these are “for a rainy day” – well right now, “it’s pissing down!”

Workers and residents are facing ever-rising energy costs, fuel bills, housing costs, food bills… And the council has hiked rents by £4 a week and put 4.99% on council tax bills.

In line with Unite’s policy on local government initially using reserves while mobilising mass campaigns to fight the cuts, seven Socialist Party members are standing in the Hackney elections. We are part of the Trade Unionist and Socialist Coalition challenge nationally and fully support the 10% wage claim.

Onay Kasab is our main speaker at an eve-of-poll rally on Wednesday 4 May. We have invited reps and strikers from the council disputes to attend and speak as well.

This dispute could play a crucial role in exposing the rubber backbones that Labour councils have in not standing up to this weak Tory government. Instead of meekly implementing their cuts, they should be standing tall and demanding the money back. If they did that, the local community and the workforce could stand as one with them and dump the Tories out of office.