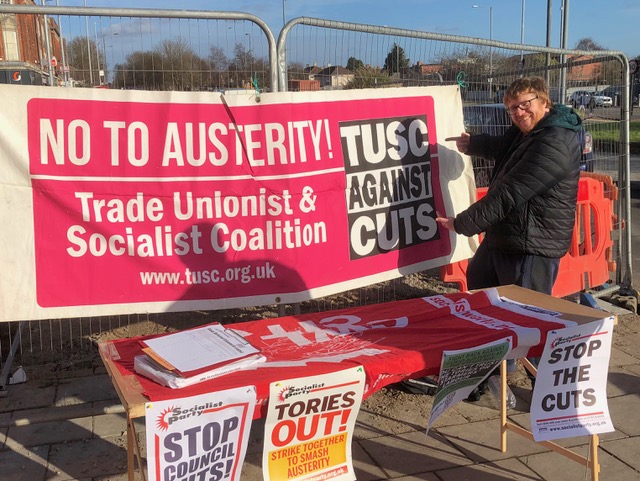 Organise a fightback against the cost of living catastrophe

•          Support the strikes. Workers are fighting back across the country. Trade union leaders need to build coordinated action for maximum impact on the government, local authorities and the bosses.

•          Build for the 18 June national trade union demonstration. We need a mass working class march in central London as a springboard to further action.

•          Fight for a new mass workers’ party. On 5 May 2022 there were more than 270 Trade Unionist and Socialist (TUSC) candidates standing against the establishment parties in the local elections. It’s a good start but we need far more. If you want to see working-class fighters in the council chamber why not put yourself forward to join the next TUSC electoral challenge.

•          Join the Socialist Party! Fight for socialist ideas to end the ‘them-and-us’ society – and the poverty, inequality and war that it brings.

The Socialist Party is part of the Trade Unionist and Socialist Coalition: www.tusc.org.uk

As the local election results started to come in, some things were immediately clear. Many voters expressed their anger at the Tories’ government of the billionaires – with its lies, hypocrisy and, above all, presiding over the worst fall in living standards in over 60 years.

Some did so by voting for Starmer’s New Labour, but many more stayed at home. For other voters the experience of Labour councils implementing Tory austerity meant that it was Labour that they wanted to punish at the ballot box. None of the capitalist establishment parties offer anything but a diet of misery for working-class people. No wonder that in many areas there was a trend to vote against the incumbent regardless of the colour of their rosette. As a result, even the near-dead Liberal Democrats were able to pick up in a number of areas.

Overall the Tories got a battering – looking set to lose around one in six of the councillors up for election. Johnson’s disgusting attempts to mobilise voters by falsely trying to claim that voting for him would help the Ukrainian people utterly failed.

This might be the trigger for the Tory MPs ditching Johnson – although they are deeply divided including on who could replace him.  But regardless of who leads the Tory Party it will continue to look after the billionaires and inflict austerity on the rest of us.

But this was not a victory for Starmer’s New Labour party, which offers no alternative to the Tories as far as working-class people are concerned. Its pledge to ‘balance the books’ will mean more cuts and austerity, and no relief for those struggling to pay the bills and put food on the table. Starmer has ditched Jeremy Corbyn’s promise to nationalise the energy companies, which would be a first step needed to bring down the astronomical price rises.

Unsurprisingly Labour spokespeople have tried to blame Jeremy Corbyn – no longer even allowed to sit as a Labour MP – for Labour’s lacklustre results in this election! However, the last time most of these seats were contested was in 2018 under Corbyn’s leadership – and there was an 8% swing to Labour, with the party level-pegging with the Tories nationally. It wasn’t a great performance – after all, Starmerite Labour councils were implementing austerity back then – but it was a bigger swing to Labour than this year, 2022, because Corbyn’s policies for nationalisation, mass council housebuilding and free education were popular. Starmer’s promise to act in the interests of big business is anything but.

As voters search for a left alternative to the capitalist establishment parties, some turned to the Greens. However, the Greens are not a socialist party and have also implemented austerity whenever they’ve come to power.

Working-class people are facing a worsening economic crisis. To fight back effectively we need two main things. We need combative trade union leaders who can fight for the wage and benefit increases we need. An important next step is fighting to turn the national trade union demonstration on 18 June into a massive show of strength on the streets of London, as a step towards coordinated strike action – and a new workers’ party that represents the interests of workers, young people and pensioners, in opposition to the pro-capitalist policies of the main establishment parties. A new party based on the trade unions, that fights for a different way of organising society – taking the wealth out of the hands of the capitalist class and planning the economy under the democratic control of working-class people – and that is prepared to fight for it on a mass scale.

If you agree join us!