End the occupation of Iraq 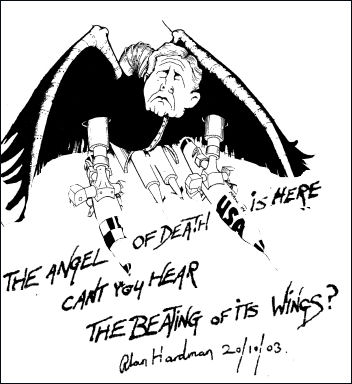 WHILE BUSH prepares to fly over and take tea with Tony in the next couple of weeks, the agony of Iraq’s occupation continues unabated.

Coordinated suicide bombings against the International Red Cross and police stations have killed at least 35 people and injured over 200, most of those civilians.

20,000 Iraqi civilians have been seriously injured so far and 200 killed by cluster bombs alone. Iraqi deaths total at least 7,768, though US General Tommy Franks has explained that “we don’t do body counts”.

The US declared military victory on 1 May. Since then nearly 200 more soldiers have been flown home in body bags as Iraqi resistance grows and becomes more sophisticated.

Bombings are becoming a daily occurrence and a rocket attack aimed at the Rashid hotel in Baghdad almost succeeded in killing US deputy defence secretary Wolfowitz on 26 October.

Actions like this have shaken Paul Bremer, the US administrator of Iraq, into realising that military occupation is a growing problem for the coalition forces. Secretary of State Powell blurted out: “We did not expect this would be quite this intense for so long”.

Not a single weapon of mass destruction (WMD) has been unearthed. In March Bush told UN arms inspector Hans Blix that time had run out for inspections. But now he and his chorus in the New Labour leadership urges the world to be patient as it could take many months to locate incriminating evidence. Perhaps what he means is the CIA hasn’t had the chance to plant it yet!

No wonder Blix is nauseated by this hypocrisy and has publicly charged Bush and Blair with having a hidden agenda to wage war against Iraq. He’s finally caught up with what millions of us who marched and organised against the war for oil knew all along.

Serious voices in the US are becoming deeply alarmed at the quicksand in Iraq, which takes on more and more of the features that the US faced in the Vietnam debacle. Fears are mounting for Bush’s 2004 Presidential hopes as his strategy falls into tatters and military budgets soar.

London will not be a safe haven for war criminal Bush. His unwanted visit will reignite the anger of hundreds of thousands who opposed this war.

Millions are demanding regime change in Washington and London. To their voices we add – change the system that creates inequality, terrorism and war. Build a socialist world!